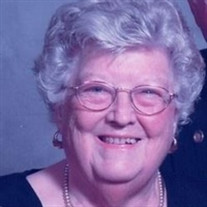 ANNA LEE S. HILDEBRAND NEW HOPE, VA Anna Lee (Sandridge) Hildebrand, 88, widow of Lawrence William Hildebrand, of The Legacy at North Augusta, died Sunday, August 11, 2013, at Shenandoah Nursing Home, Fishersville. She was born March 26, 1925, in Augusta County, a daughter of the late David and Eva (Garber) Sandridge. She was a member of Middle River Church of the Brethren and associate member of Barren Ridge Church of the Brethren. Family members include two sons and a daughter-in-law, William Hildebrand of Chestertown, MD, and Terry Scott and Nancy Hildebrand of New Hope; five grandchildren, Michael, Erik, Joseph, and David Hildebrand, and Tiffany Huberts; five great grandchildren; a niece, Cathy Long; and a nephew, John Sandridge. She was the last living member of her immediate family. In addition to her parents and her husband of 66 years, she was also preceded in death by a brother, Paul Sandridge and an infant sister. A graveside service will be conducted at 10 a.m. Thursday, August 15, 2013, at Middle River Church of the Brethren Cemetery followed by a memorial service at 11 a.m. in Barren Ridge Church of the Brethren by the Rev. Galen Combs. Active pallbearers will be her grandsons and nephews, John Sandridge, and James Lilley. Honorary pallbearers will be members of her Sunday School class. The family will receive friends from 6 until 8 p.m. Wednesday, August 14, 2013, in the Henry Funeral Home. In lieu of flowers, donations may be made to Barren Ridge Church of the Brethren, 1790 Barren Ridge Road, Staunton, VA 24401. Henry Funeral Home is handling the arrangements.

The family of ANNA LEE HILDEBRAND created this Life Tributes page to make it easy to share your memories.

Send flowers to the HILDEBRAND family.