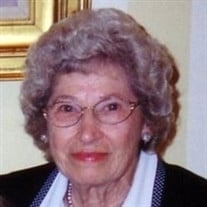 ANNE P. SANDERSON VERONA, VA Anne Jeanette (Padgett) Sanderson, 85, wife of James Earl Sanderson of 203 Skyview Circle, Verona, died Friday, July 15, 2011 at his residence. She was born June 12, 1926 in Lynchburg, a daughter of the late Arthur McDaniel and Katherine (Seay) Padgett. Prior to retirement, Mrs. Sanderson was employed as a lab tech with Merck. She later worked at Blue Ridge Community College and for the Virginia Home Extension Service. She was a member of the Verona Women's Club Extension Homemakers She graduated from Mary Washington College of the University of Virginia with a BS in Mathmatics and Science. Mrs. Sanderson was a member of Memorial Baptist Church, where she was Financial Secretary for seven years, an active member of her Sunday School Class, and enjoyed working with the flower committee for many years. In addition to her husband, family members include two daughters, Cathy Sanderson Dickens of Richmond and Claire Sanderson Kersh of Williamsburg; a brother and sister-in-law, Henry Arthur and Margaret Padgett of Cedar Hills, TX; and seven grandchildren, Lindsay Kersh, Blair Kersh, Cameron Kersh, Bailey Kersh, Christopher Dickens, Victoria Dickens, and Ariana Dickens. She was preceded in death by a grandson, Patrick Kersh. A funeral service will be conducted at 12:30 p.m. Monday, July 18, 2011 at Memorial Baptist Church by the Rev. Temple D. Myers. Burial will follow in East Lawn Cemetery, Harrisonburg. In lieu of flowers, memorials may be made to Memorial Baptist Church, 224 Taylor Street, Staunton, Virginia 24401 or to Hospice of the Shenandoah, P. O. Box 215, Fishersville, VA 22939.

The family of ANNE JEANETTE SANDERSON created this Life Tributes page to make it easy to share your memories.

Send flowers to the SANDERSON family.