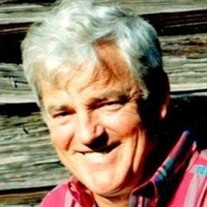 ARTHUR J. MORGAN STAUNTON, VA Arthur James Morgan, 78, died on January 3, 2014, at Augusta Health in Fishersville. Originally from Scarsdale, New York, Arthur was born to Charles and Isabel Morgan on September 12, 1935. His parents, brother, and sister pre-deceased him. Arthur was an executive with Morgan Manhatten for 30 years. Founded by his family in New York City, the company was at one time the largest moving and storage company in the world. "Art" lived with his wife, Katherine, in Connecticut and Florida prior to their moving to Staunton 10 years ago. Arthur Morgan graduated from Catholic schools, LaSalle Military Academy, and the U.S. Merchant Marine Academy. He taught cross-country navigation as a flight instructor in the U.S. Navy. Art loved the sea and salt water fishing. He was well known for his keen sense of humor. Art played baseball and football and coached youngsters. He also became an accomplished golfer who played in many amateur tournaments. In his 20's, he competed with an exciting 16-year-old golfer named Jack Nicklaus. Later in life, Art founded the noteworthy "Rug Beaters" golf team in Westchester County, New York. In retirement, Arthur pursued his underlying lifelong passion. In the 1990's, Art attended the Lyme Academy art school in Connecticut, and spent the majority of his remaining days doing what he loved most: studying and practicing painting. He had several showings of his artwork. Arthur is survived by his wife of 25 years, his four children and eight grandchildren. He treasured his family and will be profoundly missed. Art strongly believed that no human being should go hungry. Please direct any charitable donations in his memory to Valley Mission or Blue Ridge Food Bank. A Memorial service will be held at a later date.

The family of ARTHUR JAMES MORGAN created this Life Tributes page to make it easy to share your memories.

Send flowers to the MORGAN family.