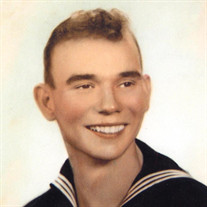 Aubrey Louis Painter, 98, widower of Kathleen (Hipes) Painter, passed away Wednesday, October 13, 2021 at Brightview Baldwin Park in Staunton. Mr. Painter was born on July 7, 1923 in Clifton Forge, VA to the late Albert Lee and Nellie (Clapsaddle) Painter. He served in the US Navy during World War II and received an Honorable Discharge as a Storekeeper Second Class V6 in 1946. He received his B. S. Degree from Lincoln Memorial University in Tennessee. Mr. Painter retired after 38 years as a teacher with many years at Virginia School for the Deaf and Blind. He was a member of St. John’s United Methodist Church, a life member of Staunton V.F.W. #2216, and a member of American Legion Post 13, DESA Destroyer Escort Sailor’s Association and Old Dominion DESA. He is survived by two daughters, Karen Jackson of Murrells Inlet, SC and Kathy Carter of Churchville; three grandchildren, Audrey Brown (Todd), Krista Hallonquist, and Josh Jackson (Jennifer); three great grandchildren, Noah Brown, Sarah Brown, and Tyler Hallonquist; and a niece, June Hipes. In addition to his wife and parents, he is preceded in death by a son, Andrew Louis Painter; a son-in-law, Eddie Carter; and four siblings. A Graveside Service will be conducted at 11:00 a.m., Wednesday, October 20, 2021 at Augusta Memorial Park with military rites by VFW #2216 and American Legion Post 13. In lieu of flowers, memorials may be made to the Wounded Warrior Project, 1120 G Street NW, Suite 700, Washington, DC 20005.

The family of Aubrey L. Painter created this Life Tributes page to make it easy to share your memories.

Send flowers to the Painter family.