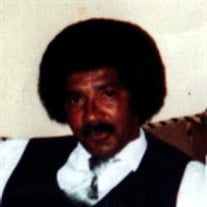 BENJAMIN A. FREEMAN, SR. STAUNTON -- Benjamin A. Freeman, Sr., 59, husband of Gloria (Wells) Freeman, 107 Vickers Way, Staunton, died Saturday, June 2, 2012 in Shenandoah House, Fishersville. He was born May 31, 1953 in Staunton Virginia, son of the late Raymond J. and Nancy Woodward Freeman. He was a United States Army veteran. In addition to his wife, he is survived by three sons, Deon Freeman of Staunton, Benjamin Freeman Jr. and Shaka Griffin of California, Deon Freeman of Staunton, a daughter, "my darling" Brazell Freeman; a brother and sister-in-law, Rodney and Sylvia Freeman; a sister, Ramona Freeman, all of Staunton; a godson, Bernard Montgomery; a special sister-in-law, Patricia Robinson of California; and a number of grandchildren, nieces and nephews. In addition to his parents, he was preceded in death by a two sons, Adrian Freeman, Ladon Griffin; one brother, Raymond Freeman and one sister, Brenda Jones. A funeral service will be conducted at 10:00 a.m. on Monday (June 11, 2012) in the Henry Funeral Home Chapel by the Rev. Ray Eppard and the Rev. Jerome Jones. Burial will follow at 2:00 p.m. in Culpeper National Cemetery. Repass at Friendship Church on 1601 West Beverley Street, Staunton, at 5 p.m. The family will receive friends one hour prior to the service at Henry Funeral Home. Condolences may be made to the family at www.henryfuneralhome.net.

The family of BENJAMIN ANTHONY FREEMAN created this Life Tributes page to make it easy to share your memories.

Send flowers to the FREEMAN family.