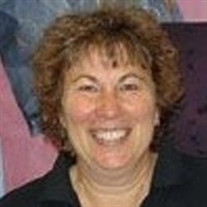 STAUNTON, VA Beverly Ann (Baker) Roach, 58, wife of Michael Roach, of Staunton, died Friday, May 24, 2013, at University of Virginia Medical Center. She was born on January 12, 1955, in Nanticoke, PA, a daughter of the late Edward J. and Mary (Cardone) Baker. Mrs. Roach graduated from Bridgewater College in 1977 with a bachelor's degree in Elementary Education. She was employed by the Augusta County School System for 36 years, teaching kindergarten, 1st grade and 3rd grade at Churchville Elementary School. She was awarded Teacher of the Year in 2008 by Churchville Elementary and Augusta County. She was also the recipient of the Dawbarn Award. She helped children love to learn. She was a member of St. Francis of Assisi Catholic Church where she served on the Parish Council, Catholic Daughters, and the Church Jubilee Committee. She was the past chair of the Church Bazaar Committee, past youth minister, and taught CCD. She was well known for her calligraphy, bubbly personality, her contagious smile, and generosity with her hugs. In addition to her husband, family members include three daughters, Nicole Marie Haymore and husband, Joshua, of Woodstock, Teresa Michelle White and husband, Lt. James White, of Safety Harbor, FL, and Emily Megan Roach of Staunton; a grandson, Zachary Bryan White; two brothers, Edward Baker and wife, Chris, of Raleigh, NC, and Michael Baker of Falls Church; and a Godmother, Eleanor Pish, of Allentown, PA. A Mass of Christian Burial will be conducted at 10:00 a.m., Tuesday, May 28, 2013, at St. Francis of Assisi Catholic Church by Father Joseph Wamala. Burial will follow in Thornrose Cemetery. Active pallbearers will be Russell Laub, Charles Hildebrand, William Kerr, Christopher Robinson, Herb Harman, and Michael Lilley. The family will receive friends from 6:00 until 9:00 p.m. on Monday, May 27, 2013, at Henry Funeral Home. Memorials may be made to the Churchville Elementary School - 600 Club (established by Beverly Roach), 3710 Churchville Avenue, Churchville, VA 24421 or St. Francis of Assisi Catholic Church, 118 North Augusta Street, Staunton, VA 24401

STAUNTON, VA Beverly Ann (Baker) Roach, 58, wife of Michael Roach, of Staunton, died Friday, May 24, 2013, at University of Virginia Medical Center. She was born on January 12, 1955, in Nanticoke, PA, a daughter of the late Edward J. and Mary... View Obituary & Service Information

The family of BEVERLY ANN ROACH created this Life Tributes page to make it easy to share your memories.

Send flowers to the ROACH family.