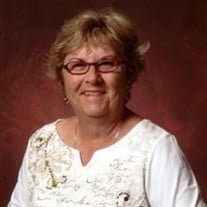 BONNIE M. PATTERSON STAUNTON -- Mrs. Bonnie May (Woodfield) Patterson, 68, of 801 Monroe Street, died at 4:35 p.m. on Friday (September 23, 2011) in University of Virginia Hospital. She was born October 30, 1942 in Washington, D. C., daughter of the late Russell T. and Ruby (Thompson) Woodfield. Bonnie was a graduate of Maret School in Washington, D. C. and the University of Maryland. She was a member of Delta Kappa. She was a member of Covenant Presbyterian Church where she taught pre-school and played in the Bell Choir. She was preceded in death by her brother, Richard Woodfield and her sister, Jean Dod. Family includes her two sons and a daughter-in-law, Tyler and Ginger (Wagner) Patterson of Staunton, and Darryl Patterson of Montana; her daughter and son-in-law, Kellee and Hermann Pfeuti of New Hampshire; brother, Roland Woodfield of Colorado; and five grandchildren, Spencer, Conner, and Cooper Patterson, Nicholas Smith, and Christan Pfeuti. A funeral service will be conducted at 7:00 p.m. on Monday (September 26, 2011) in Covenant Presbyterian Church by the Rev. John Peterson. Graveside services will be held at 2:00 p.m. on Tuesday in Upper Seneca Baptist Church Cemetery, Germantown, Maryland. The family is receiving friends at her son's home, 710 Ritchie Boulevard, Staunton. Memorials may be made to the American Heart Association, 4504 Starkey Road, SW, Suite 115, Roanoke, VA 24018 or to Staunton City Schools, c/o Dr. Steven Nichols, Superintendent, P.O. Box 900, Staunton, VA 24402-0900.

The family of BONNIE MAY PATTERSON created this Life Tributes page to make it easy to share your memories.