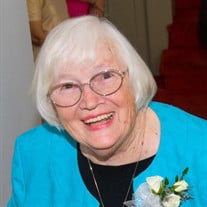 Barbara Ann Medland Farley, 93, passed away on Sunday, April 3, 2022, near Staunton, VA. Fondly known as “Bib,” “Barbie,” “Mom,” or “Granny,” her love of family, hospitality, and people defined her long and abundant life. Born in Waymart, PA, Barbara was the daughter of Harry Price and Frances Spangenberg Medland. She was a proud graduate of Waymart High School and even traveled to her 75th reunion last summer. She attended Bucknell Junior College (now Wilkes University) in Wilkes-Barre, PA, where she met her future husband, Robert Coates Farley, son of the college president, Dr. Eugene S. Farley, and his wife, Ethel Coates Farley. Barbara and Bob were married on Valentine's Day, 1948, in the Waymart Methodist Church. Bob’s career in the paper industry took them to Louisiana, Pennsylvania, New Jersey, Connecticut, Maine, and Tennessee. In 1965, after many happy years living along the New England coast, Barbara, Bob and their growing family moved south to Greeneville, TN, where they lived for 21 years. In addition to managing a household of now seven children, Barbara was active in the community. She played a key role in developing the Head Start program, served as president of the League of Women Voters, and she was the first woman in the town’s history to run for town alderman. Always supportive of her children’s activities, Barbara could be found at athletic events, plays, band concerts, and at the First Presbyterian Church. Education was a high priority in the Farley household. After sending four daughters to college, and with three children still at home, she was inspired to complete her college education. In 1978, she graduated from Tusculum College with a B.A. in Early Childhood and Special Education. She then taught special education classes in Greene County, TN, and near Wilkes-Barre, PA. She was committed to her students, one of whom remained in regular contact with her for over 40 years. In 1986, Barbara and Bob retired to “Fair-Lea”, the family farm in Beaumont, PA. They were active in the North Branch Friends Meeting, tutored in the local schools, and participated in activities and events that nearby Wilkes University offered. They enjoyed the frequent visits of their children and grandchildren, and they loved traveling to visit them across the United States and in England. Sadly, Bob passed away at Fair-Lea in 1991. With the support and love of many neighbors and friends, Barbara remained at her beloved “Farm” for almost 20 more years. In 2010, Barbara moved to Staunton, VA, to be closer to her son Ben and his family. Here she continued to enjoy family life and serve the community by tutoring and serving as class grandmother. She also enjoyed her many new friends, especially at the bridge table. Barbara attended Trinity Episcopal Church. Barbara embraced all people and made them feel part of her family. Names, birthdates, and endeavors were etched in her keen mind. She enjoyed sharing stories of her childhood and researching the genealogy of the Medland and Farley families. She baked bread, cinnamon buns, and brownies to share with all. She loved reading, music, animals - especially dogs, and the birds and squirrels at her window feeder. She was happiest when rocking a baby to sleep while singing beloved songs, many of which have become a family legacy. Barbara was preceded in death by her husband Robert, and while she was still a child, by her mother and father. She was also preceded in death by: her siblings, Harding Medland, Marjorie Medland Huntley, and Harry Medland; her childhood caregiver, Jennie M. Rivenburg; her infant grandson, Bryan Gettinger; and her special friend and bridge partner, John Michael Harrison. Barbara is survived by her seven children and their spouses: Frances Farley Pan (Donald) of Maine, Lindsay Farley Gettinger (George) of Rhode Island, Georgiana Farley Deering (Robert) of England, Judith Farley Tyler (Bruce) of Texas, Sarah Farley Stapleton Nerino (Michael) of Pennsylvania, Robert Farley, Jr. (Margot) of Washington, D.C., and Dr. Benjamin Farley (Jacqueline) of Virginia. She is also survived by: 16 grandchildren and their spouses, Braden Pan (Lauren), Lincoln Pan (Claire), Eliza Gettinger Pfeifer (Matt), Ben Gettinger, Ted Gettinger, Sarah Deering Kalaher (Bill), Robert Deering (Georgina), Laura Deering, Andrew Tyler (Grace), Charles Tyler (Jenna), Meredith Tyler da Silva (Daciano), Luke Stapleton, Emma Stapleton, Helen “Allie” Farley (Sebastian Strong), Moses Farley, and Ben Farley, Jr.; nine great-grandchildren, Leo Pan, Harvey and Willa Pfeifer, Sylvie Kalaher, Harper and Hudson Tyler, Cameran and Marshall Tyler, Theo Strong; and numerous nieces, nephews, grandchildren by marriage, and their families. We will miss her wisdom and caring, her smile and laughter. We will miss her warmth and inextinguishable love. We will cherish the memories she gave us and her example of a life well-lived. Services for Barbara will be held at Trinity Episcopal Church in Staunton VA on April 24, 2022, at 1:00 pm with a reception in the Trinity fellowship hall to follow. Online condolences may be expressed at www.HenryFuneralHome.net. In lieu of flowers, the family suggests a donation to the Eugene S. and Eleanor Coates Farley Scholarship at Wilkes University or to a favorite charity.

The family of Barbara M. Farley created this Life Tributes page to make it easy to share your memories.

Send flowers to the Farley family.