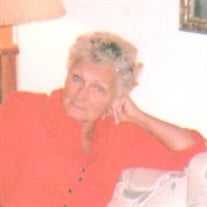 Barbara JoAnn Lahorner Rowe, 80, passed away on Friday, July 5, 2019 at her daughter&#8217;s residence in Fairfeld. She is now free from the bonds of Alzheimer&#8217;s and is dancing in the heavens.  She was born September 9, 1938 in Craigsville,... View Obituary & Service Information

The family of Barbara JoAnn Lahorner Rowe created this Life Tributes page to make it easy to share your memories.