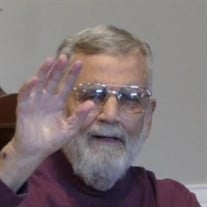 Benjamin Rowland “Bubba” Byrd, husband of Ruth F. Byrd, of Staunton, VA, passed away on Friday, October 8, 2021 at Augusta Health. Mr. Byrd was born June 15, 1937, in Nansemond County, Virginia, a son of the late Stanley R. and Essie F. (Bradshaw) Byrd. Mr. Byrd served in the Army and was stationed in Germany. He retired from National Linen Service after 33 years. He was a member of Bethany Presbyterian Church, a life member of Staunton Elks BPOE #351, Aerie Eagles #680 and a lifetime member of the Shenandale Gun Club. In addition to his parents, he is preceded in death by a sister, Joanne Byrd Cook and a brother, Charles T. Byrd. He is survived by his wife of 59 years, a daughter and son-in-law, Gayle Byrd and Doug Moore of Waynesboro, VA and son and daughter-in-law, Jeffrey R. and Lisa Byrd of Staunton, VA; grandsons who were his pride and joy, Benjamin Good, Jacob Good and friend Megan Britt of Mt. Sidney, VA; two brothers and sisters-in-law, Edward and Shirley Byrd of La Quinta, CA and David and Debbie Byrd of Staunton, VA as well as many nieces and nephews. Family will receive friends from 5:00 – 8:00 PM on Friday, October 15, 2021 at Henry Funeral Home and other times at the residence. A memorial service will be held at 11:00AM on Saturday, October 16, 2021 at the Henry Funeral Home Chapel by Reverend John Craft. Burial will be private. At the request of the family and to honor Bubba, please dress casually for the services. Honorary pallbearers will be members of Staunton Elks #351 and Shenandale Gun Club. The family would like to extend a big thank you to the nursing staff at Augusta Health for their excellent care. In lieu of flowers, memorials/donations can be sent to Bethany Presbyterian Church, 2501 Fifth Street, Staunton, VA 24401 or Staunton Elks Christmas Basket Fund, PO Box 2681, Staunton, VA 24402.

The family of Benjamin Rowland Byrd created this Life Tributes page to make it easy to share your memories.

Send flowers to the Byrd family.