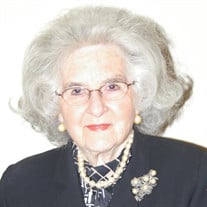 Betty Talley Combee passed from this life on March 31, 2022 and now inhabits a home not made with hands but eternal in the Heavens. Some lives impact the lives of others in ways too numerous to count.... and such life was that of Betty (Kyle) Ruth Talley Combee. Born on November 12, 1926 at the home of her parents on Churchville Avenue in Staunton, Virginia, she grew up locally attending city schools and graduating from Robert E. Lee High School in 1942. Her entire life revolved around family, church, and music. She was educated in music from an early age under the instruction of Professor Manch and Mrs. Gladys Wenner, and later attending and graduating from Shenandoah College and Conservatory of Music in 1947, with a degree in choral music and piano. Betty established the Choral Music Department in the Augusta County School System while teaching at Wilson Memorial High School in Fishersville, Virginia in 1947. Previously to this, she taught choral music at VSDB (Virginia School of the Death and Blind) in Staunton. She was a lifelong member of St. Paul’s U.B. Church (later U.M. Church), where she became the Minister of Music in 1952 under Dr. John R. Sawyer. She served in that capacity for thirty-seven years until her retirement whereupon she was rehired as the church organist, serving another, fifteen years. During all this time, she served as the staff organist for Henry Funeral Home in Staunton. She played for hundreds of funerals and weddings all over the Shenandoah Valley. She was also the worship leader for the Staunton Christian Women’s Club and the Staunton Chapter of A.G.L.O.W. Betty’s love for Jesus and her love of people were what set her apart….it was real…heartfelt…nothing phony. She could be funny...eccentric… charming…sweet as sugar…sharp as a tack…but she was never phony. To know her was to love her, even if you met her for the first time. . .she was gifted in drawing people in and establishing an immediate rapport. Betty never thought she would live her life outside of Staunton, Virginia, but for the last number of years she has been cared for by her stepdaughter, Laurie, and her husband, Grady, down in Southport, North Carolina. Many thanks are extended to them for their love and support during her twilight years. She was preceded in death by her first husband, W.W. (Mickey) Talley, Jr., whom she married in 1950. She was then preceded in death by her second husband, Donald Edward Combee, whom she married in 1984. Also preceding her in death were her mother and father Mr. and Mrs. G.A. Kyle of Staunton, Virginia and four siblings: Dorothy Beck, George Kyle, Jr., Nancy Detamore , and William Kenneth Kyle. She is survived by one son, Sammy Talley (Sue) of Winchester, Ohio, three stepsons, Donald Combee, Jr. (Pebby) of Charleston, South Carolina, Peter Combee (Candice) of Staunton, Virginia, Todd Combee (Susan) of Mechanicsville, Virginia and two stepdaughters, Judi Aldridge (Tom) of Pooler, Georgia, and Laurie Sillings (Grady) of Southport, North Carolina. There are also many grandchildren, great grandchildren, nieces, nephews, great nieces and nephews, and a host of other family and friends who loved her dearly. Both the visitation and funeral service will be held at St. Paul’s U.M.C. in Staunton on Wednesday, April 13, 2022. Visitation will be held at 10:00 AM and the funeral service will immediately follow at 11:00 AM. Burial will be in Thornrose Cemetery and a fellowship luncheon will follow in the activity Hall of St. Paul’s to which family and friends are invited to share their memories of Betty over the years. Memorial Contributions can be made to Gideons Intl, St Paul’s UMC, St. Jude’s Children’s Hospital, the American Red Cross, or the Staunton- Augusta County Fire Dept. and Staunton Rescue Squad.

Betty Talley Combee passed from this life on March 31, 2022 and now inhabits a home not made with hands but eternal in the Heavens. Some lives impact the lives of others in ways too numerous to count.... and such life was that of Betty (Kyle)... View Obituary & Service Information

The family of Betty Talley Combee created this Life Tributes page to make it easy to share your memories.

Send flowers to the Combee family.