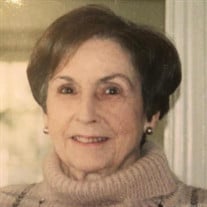 Stuarts Draft, VA… Betty Wise Wright Richmond died peacefully on January 8, 2021 in Stuarts Draft, at the age of 95. Betty was born on March 6, 1925 in Waynesboro, the daughter of the late Lou Nell Massie Wright and James Walton Wright. Betty was predeceased by her three siblings, James Walton Wright, Jr., Edwin Massie Wright and Mary Sue Wright and her daughter, Lynn McLin Richmond, who also died on January 8th in 1994. Betty is survived by her daughter, Blair Richmond Montgomery (Michael) of Franklin, TN; her son, Robert Tyler Richmond III (Betty) of Staunton; grandchildren, Robert Tyler Richmond IV of Charlottesville, Lissie Richmond Lockard (Michael) of Richmond, Kathleen Gallaer Scarborough (Sam) of Virginia Beach; great grandchildren, Joseph Lockard of Richmond, Addie Scarborough and Jake Scarborough of Virginia Beach. Betty graduated from Waynesboro High School and attended Longwood College. She married Robert Tyler Richmond, Jr., a graduate of the United States Military Academy in 1946. She lived an exciting life as a career Army wife, traveling the world! She was always stylish. Betty was an antique enthusiast, an avid reader and loved playing tennis. She was a member of The First Presbyterian Church of Staunton. Betty’s golden years were spent enjoying her grandchildren and great grandchildren Due to COVID-19 there will not be a memorial service at this time. The graveside service will be for the immediate family only. Private services will be held at a later date. The family would like to thank Stuarts Draft Retirement Community for their loving care and support. In lieu of flowers, donations may be made to a charity of your choice.

The family of Betty W. Richmond created this Life Tributes page to make it easy to share your memories.

Send flowers to the Richmond family.