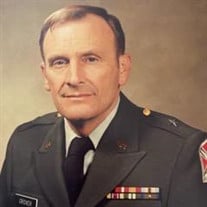 Brigadier General Bruce Gordon Grover passed away on April 28, 2020, at home after a brief illness. He was born in Baldwin, Long Island, New York on August 18, 1929, the son of Scott and Mai Elizabeth (McCarty) Grover. Grover grew up on Long Island, Owensboro, KY, New York City, and finally Nyack, New York, which he considered his hometown. He attended Nyack High School where he met the love of his life, Ruth Charlotte Schneider. In the fall of 1946, Grover enrolled in Cornell University’s School of Agriculture and majored in economics. He was a member of Alpha Chi Rho fraternity, worked nights as a short order cook at the college cafeteria, played some football, was president of the Boxing Club, studied and enjoyed college life. He graduated in June 1950, just days before the start of the Korean War. Having earned a regular Army commission through ROTC, he entered the Army and served six years in the US, Germany, and Korea. He remarked once that he arrived at wars just after the fighting was over. In 1952, while stationed in Germany, he returned home to marry Ruth. The ceremony was a double-wedding with Ruth’s twin sister, Nancy, marrying Hudson Blauvelt. For the first time since the end of World War II, the bells of First Presbyterian Church of Nyack rang to celebrate the wedding. In 1953, Ruth joined him in Hanau and from there they were able to travel and see the many sights of Western Europe. After six years of service in the active Army, he resigned his regular Army commission and entered the Army Reserve. Grover proceeded to serve four years in the reserve and then twenty-five years in the Virginia Army National Guard, where he served in the “Stonewall Brigade” and later commanded the 224th Artillery Group. He ended his service in the Guard as Deputy Adjutant General. In 1956, Grover began a career of thirty-five years in sales and sales management within the agricultural industry; first with American Cyanamid Company and then with Wampler Foods. A lifelong Republican, Grover was chair of the Staunton Republican Party Committee for many years. He was a deacon and an elder in Augusta Stone Presbyterian Church, and a member of the Staunton Kiwanis Club, Saints and Sinners, and the Tuesday Afternoon Poker Club. He loved God, loved his family and loved the United States of America. Though he was often out of town several nights a week and many weekends for work and National Guard commitments, he still found time to coach youth league football, help run Kiwanis Little League, maintain an old house and help raise five children. He never complained. He was always willing and happy to serve his family, his employer, his church, his community, and his country. Bruce was also known as Big Cat, Papa, Pop-pop, and Gramps. He loved history and politics whether he knew the tune or not. He was a gentleman and always tried to do the good and honorable thing. Bruce was an exemplary father and his children will tell you he was the finest man they have ever known. He was preceded in death by his parents, his sister, Sonia, and his brother, Scott. Grover is survived by four sons and a daughter: Dr. Bruce Scott Grover and his wife, Judy, of Kingsport, TN; Dr. Robert Ellis Grover and his wife, Brenda, of Charlottesville, VA; John Gordon Grover and Martha Grover of Richmond, VA; Nancy Grover Giesen and her husband, Jonathan, of Hoover, AL; and Dr. Christopher Alan Grover and his wife, Judy, of Afton, VA. He is also survived by thirteen wonderful grandchildren: Bruce G. Grover and his wife, Naomi; Dr. William Grover (Jennifer); Andrew and Sarah Grover; Elizabeth, Dorothy, and Jack Grover; Jonathan Giesen (Ryan) and Christopher Giesen; Clark, Garrett, Scott and Anna Grover. He is also survived by five, loving great-grandchildren: Lily, Vivian, Llewyn, Lydia, and Jonathan. A memorial service will be held at a later date in the summer. In lieu of flowers, donations can be made to Augusta Stone Presbyterian Church (the Bruce Grover Memorial Fund); P.O. Box 118, Fort Defiance, VA 24437.

Brigadier General Bruce Gordon Grover passed away on April 28, 2020, at home after a brief illness. He was born in Baldwin, Long Island, New York on August 18, 1929, the son of Scott and Mai Elizabeth (McCarty) Grover. Grover grew up on Long... View Obituary & Service Information

The family of Bruce G. Grover created this Life Tributes page to make it easy to share your memories.

Send flowers to the Grover family.