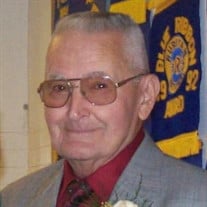 Bryan Wilson Bottenfield, 79, devoted husband for 59 years of Betty Lou (Nicely) Bottenfield of New Hope, died on Tuesday, October 22, 2019 at Augusta Health. He was born November 29, 1939 in Bath County, a son of the late Clarence Albert and Etta Jane (Sprouse) Bottenfield. Bryan was hard-working, a problem-solver, and highly skilled in nearly every trade. If it was broke he could fix it, no matter what “it” was. He took immense pride in all that he did. He put these traits to good use at E.I. DuPont, and upon retirement from there, at Commonwealth Excavating and as the (former) owner of New Hope Grocery. Bryan was an active member of Laurel Hill Baptist Church and often used his talents to serve others through special projects or missions. Some of his favorite pastimes included working in the garden, tinkering in his building, hunting, and building his woodpile for the winter. The most important thing in life to Bryan was his family. His grandchildren and great grandchildren were his pride and joy. In addition to his wife, family members include two sons and daughters-in-law, Bryan Keith and Lisa J. Bottenfield of New Hope and David Wilson and Lisa W. Bottenfield of Verona; a daughter, Judy Paige Bottenfield of Waynesboro; a brother and sister-in-law, Herman L. and Carol Bottenfield; a sister, Mildred Doyle; a sister-in-law, Jackie Bottenfield; five grandchildren, Keri Bottenfield Rankin (Ryan), Rebecca Bottenfield Campbell (Dustin), Kelly Bottenfield Shifflett (Brian), Travis Bottenfield, and Tommy Bottenfield (Kierston); and 10 great grandchildren. He was preceded in death by two brothers, Carl G. Bottenfield and Clarence A. Bottenfield; two sisters, Dorothy Buchholz and Lucille Koogler; and a great grandson, Morris Keith Rankin. A funeral service will be conducted at 11 a.m. Friday, October 25, 2019 in Laurel Hill Baptist Church by the Rev. Bill Davis. Burial will follow in Oak Lawn Mausoleum and Memory Gardens. Active pallbearers will be Tommy Bottenfield, Ryan Rankin, Dustin Campbell, Brian Shifflett, Glen Bottenfield, and Gary Bottenfield. Honorary pallbearers will be members of the LHBC T.E.L. Sunday School class. The family will receive friends from 6 until 8 p.m. Thursday, October 24, 2019 in the Henry Funeral Home and other times at the residence. Memorials may be made to the American Cancer Society, 1445 E. Rio Road, Suite 104, Charlottesville, VA 22901 or Laurel Hill Baptist Church, 129 Old Laurel Hill Road, Verona, VA 24482. The family expresses sincere gratitude to the physicians and nursing staff at Augusta Health who cared for Mr. Bottenfield.

The family of Bryan Wilson Bottenfield created this Life Tributes page to make it easy to share your memories.

Send flowers to the Bottenfield family.