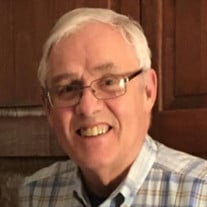 Byron Lee Lessley, 80, husband of Bonnie (Woodrum) Lessley, passed away on October 13, 2021 at Brookdale Senior Living. He was born on February 16, 1941 in Staunton to the late Erskine Miller Lessley and Eleanor (Flippo) Lessley. Byron worked as an engineer at Daikin and was a devoted husband and father. In addition to his wife, he is survived by his sons, David Lessley (Leanne) and Samuel “Sam” Lessley (Amy); his sister, Kay Linnane; and his grandchildren, Eliana and Norah Lessley. In addition to his parents, he is preceded in death by his brothers, John Lessley and Erskine Lessley, Jr. A graveside service will be conducted on Thursday, October 21, 2021 at 2:00 P.M. at Thornrose Cemetery by Reverend Jason Slye. The family will greet friends after the service. Byron was above all a devoted family man, as a husband, father, grandfather, brother, and son. He was born and raised in here in Staunton, VA and graduated from Robert E. Lee High School in 1958. Following high school, he was accepted into the Virginia Tech Corps of Cadets (along with his twin brother John) where he graduated in 1963 as a mechanical engineer. Following college, he went to work for Westinghouse in Verona, VA, and for the next 50 years he would work at that very same location as a valued employee, mentor, and friend. During those years he developed long-lasting bonds with many of his co-workers, who over the years simply became an extension of his family. In his youth, Byron was heavily involved in Scouting where he excelled and became an Eagle Scout. During this era of Scouting, it was customary that two words were selected by one’s peers and leaders to best describe the young Scout’s character. For Byron, the words that were chosen to describe his character were “Trustworthy” and “Loyal”. These are not only the characteristics that best described Byron as a boy, but also those that we would use today to describe how he lived his entire life. This is exemplified in how he cared for his own parents as they aged and needed help, in his 50-year marriage to the same wonderful woman, his devotion to his sons and grandchildren, and working for the same company for more than half a century. While Byron could be very serious at times, he also had a softer side, and was affectionately known to his family as “the Big Man”; a nick name coined by his twin brother John who would call the house to speak to Byron would ask “is the Big Man around?”…eventually it became a nickname that just stuck. Byron enjoyed life and spending time with his family, and as a father, he was very involved with each of his sons and even served as their baseball and basketball coach for many years. He enjoyed many family trips to Nags Head (which were never complete without a first stop at the Wright Brother’s museum to learn more about the bicycle mechanics who developed flight). Byron loved being outdoors and loved to spend time in the yard, and also maintaining the family plot of land in Nelson county were he shared a great deal of time with his twin brother John, as well as other members of the family. Throughout his life, Byron had a passion for cars. While as a poor college student in the 1950s, he bought his first car (a 1938 chevy from the junkyard) with his tuition money, and then didn’t have money for the next semester of college. He then had to tell his mother that needed to borrow some money for school since he had spent everything on a car in the junkyard that didn’t run. She was furious, but still loaned him the money that he needed for school. He knew that he was going to get in trouble, but he also knew she wouldn’t let him miss a semester of school no matter what. Byron used to tell this story to his sons as an example of that sometimes, when you really want something, it is better to ask for forgiveness than to ask for permission! Byron often traveled to car shows with his sons and his brother, and his favorite was the annual Corvettes at Carlisle show in Pennsylvania. Every year he would go to the show and talk about the day he might finally buy one of his own. After decades of attending this event, Sam finally twisted his arm to take the plunge and buy his own at the show in 2009. This was a well-deserved purchase and was something fun that he could share with the entire family. He and Bonnie enjoyed many outings with the friends they made in the Corvette club in the years that followed. While Byron demonstrated many admirable qualities throughout his life, it was only later in life that he demonstrated just how resilient, stoic, and tough that he was. During his last few years he faced a number of very serious health challenges, but he took it all in stride. He never complained, never showed fear, and importantly he never lost hope of recovery and getting back to the things that he enjoyed most in life. His final chapter may have been his most challenging, but he handled it with patience, hope, and grace. May his example inspire all of us to never lose hope and to always persevere with grace through the challenges that we may face ourselves.

The family of Byron L. Lessley created this Life Tributes page to make it easy to share your memories.

Send flowers to the Lessley family.