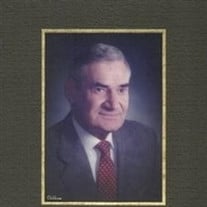 Dr. Carlon S. Land WAYNESBORO~ Dr. Carlon Sanford Land, 86, husband of Mona Land of 33 Jefferson Green, went to be with his Lord at 1:25 p.m. on Saturday, November 3, 2012 at his residence. He was born in Houghton, Louisiana on September 7, 1926. He is the son of the late Chalma and Joy (Staton) Land. He received his Bachlor degree in chemical Engineering and worked for an oil company in Venezuela and Louisiana. He was in the Air Force during the Korean Conflict. After serving, he moved to Texas where he married Erika Mona (Hollacher) in San Antonio, Texas in 1954. He moved to Wyoming as a Research Engineer at the University of Wyoming. During his employment there, he earned his Master and Doctorate degree in Petroleum Engineering. Dr. Land worked as a Consultant in Dallas, Texas before accepting a position as Professor at Texas Tech University. While there, he was named Interim Department Chairman and upon retirement was named Professor Emeritus. After retiring from Texas Tech, he moved to Charlottesville and then to Waynesboro with his wife where they have been residing for the past eight years. Dr. Land was an avid reader, Published Author and an accomplished Artist. In addition to his wife, he is survived by his daughter Shawna Deterra; a son, Michael Land; one sister, Violet Barton; grandchildren, Erika and Victor Deterra; sister-in-law, Krista Land, and a son-in-law, Victor Deterra. A memorial service will be conducted at 11:00 a.m. Wednesday (November 7, 2012) in Bethany Lutheran Church, Waynesboro by Pastor Tim Bohlmann. Following the service the family will receive friends in the Fellowship Hall where a meal will be served. Burial will be private. Those desiring may make memorial donations to Bethany Lutheran Church, 100 Maple Ave., Waynesboro, Virginia, 22980. Arrangements are being handled by Henry Funeral Home, Staunton.

Dr. Carlon S. Land WAYNESBORO~ Dr. Carlon Sanford Land, 86, husband of Mona Land of 33 Jefferson Green, went to be with his Lord at 1:25 p.m. on Saturday, November 3, 2012 at his residence. He was born in Houghton, Louisiana on September 7,... View Obituary & Service Information

The family of CARLON SANFORD LAND created this Life Tributes page to make it easy to share your memories.

Send flowers to the LAND family.