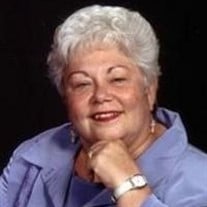 CAROL D. BROOKS STAUNTON, VA Carol Jo (Daugherty) Brooks, 63, beloved wife of Leon Brooks of 127 Sproul Lane, Staunton, went to be with her Lord on Monday, April 18, 2011 at her residence. She was born April 3, 1948 in Augusta County, a daughter of Vallie (Woods) Daugherty of Staunton and the late Merlin James Daugherty. Mrs. Brooks was a homemaker. She was a life-long member of St. Pauls United Methodist Church where she was a member of the Chancel and Celebration Choir. She was the Financial Secretary of the Church and also a member of Church Council and the Finance Committee. Carol was the Church coordinator for the Women of Faith Conference. She enjoyed her crafts and especially spending time with her grandchildren. In addition to her husband and mother, family members include ; a daughter and son-in-law, Wendy and Rick Hale of Mechanicsville; a son and daughter-in-law, Christopher B. and Alicia Brown of Staunton; two step-sons, Mark Brooks and Keith Brooks , both of Stuarts Draft; a brother, Merlin James Jimmy Daugherty of Iowa; a sister and brother-in-law, Rebecca Becki and Milton Driver of Staunton; seven grandchildren, Stephen, Bethany, Rebekah,and Matthew Hale, all of Mechanicsville, Nicholas and Brooke Brown of Staunton, and Austin Brooks, of Florida; and two nephews, Peter and Paige Driver, and Cameron and Katherine Driver; a great niece, Reagan Driver; and many beloved friends. She was preceded in death by a son, Eric Matthew Brown. A funeral service will be conducted at 11:00 a.m. Wednesday, April 20, 2011 in St. Pauls United Methodist Church by the Revs Barbara Sawyer and Jeff Allen. Burial will follow in Oak Lawn Mausoleum and Memory Gardens. Active pallbearers will be John Dillon, Wayne Anderson, Jim Taylor, Bill Campbell, Junior Scott, Clarence Forsyth, Dave Beatty, and Todd Michael. Honorary pallbearers will be her Grandchildren and JoAnn Conner, Shirley Eagle, Patsy Dillon, and Peggy Cox. The family will receive friends from 6 until 9 p.m. today, Tuesday, April 19, 2011 at St. Pauls Church. Henry Funeral Home is handling the arrangements and condolences may be sent to the family at www.henryfuneralhome.net. Memorials may be made to St. Pauls United Methodist Church, c/o Mortgage Fund, 2000 Shutterlee Mill Road, Staunton, Virginia 24401 or Relay for Life of Augusta County.

CAROL D. BROOKS STAUNTON, VA Carol Jo (Daugherty) Brooks, 63, beloved wife of Leon Brooks of 127 Sproul Lane, Staunton, went to be with her Lord on Monday, April 18, 2011 at her residence. She was born April 3, 1948 in Augusta County, a daughter... View Obituary & Service Information

The family of CAROL JO BROOKS created this Life Tributes page to make it easy to share your memories.