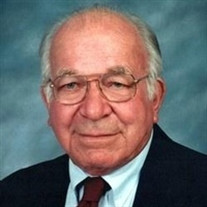 CHARLES E. HEVENER STAUNTON, VA Charles Edward "Jack" Hevener, 88, husband of Emma (Douglas) Sprouse-Hevener, of 617 Cherry Hill Drive, died Tuesday, July 10, 2012, in Augusta Health, Fishersville. He was born July 15, 1923, in Augusta County, a son of the late Robert and Sallie (Hevener) Hevener. Prior to retirement, he was employed by Stanley Furniture. He was a member of the Carpenters and Joiner Union. In addition to his wife, family members include two daughters and sons-in-law, Ginger and Nelson Hylton of Staunton and Patty and Joe Wills of Stuarts Draft; two step-sons and their spouses, Don and Nancy Sprouse and David and Jan Sprouse, all of Churchville; a step-daughter and her husband, Linda and Dwight Tinsley of Churchville; a sister-in-law, Geneva Hevener; three grandchildren, Beth Wills, Jason Wills, and Scott Hylton and his fiancé, Ashley Reist; five step-grandchildren, Neal Sprouse and his wife, Melissa, Mark Tinsley and his wife, Beth, Lyle Sprouse, Drew Sprouse, and Carrie Sprouse; six step-great grandchildren, Cole, Linden, and Ayden Sprouse, Luke, Megan, and Jack "P.J." Tinsley; numerous nieces and nephews; a special friend, Brenda Eye; and his beloved cat, Bo. He was preceded in death by his first wife, Edith Peyton Hevener; and three brothers, Robert, Thomas, and Joseph Hevener. A graveside service will be conducted at 2 p.m. Friday, July 13, 2012, in Oak Lawn Mausoleum and Memory Gardens by the Rev. Dennis Sites. The family will receive friends from 7 until 8:30 p.m. Thursday, July 12, 2012, in Henry Funeral Home. Memorials may be made to Staunton Augusta Rescue Squad, 1601 North Coalter Street, Staunton, VA 24401, to the American Cancer Society, 420 Neff Avenue, Suite 210, Harrisonburg, VA 22801, or to S.P.C.A., P.O. Box 2014, Staunton, VA 24402. A special thanks to the staff on the surgical unit of Augusta Health, Dr. Campbell and the Dialysis Unit, and to Dr. William Thompson and Dr. William Faulkenberry, of Shenandoah Valley Surgical. Condolences may be sent to the family at www.henryfuneralhome.net. "I have fought a good fight, I have finished my course, I have kept the faith." II Timothy 4:7

The family of CHARLES EDWARD HEVENER created this Life Tributes page to make it easy to share your memories.

Send flowers to the HEVENER family.