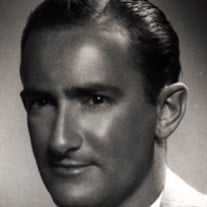 CHESTER E. FOSTER FORT DEFIANCE, VA Chester Edward Foster, 100, widower of Margaret K. Foster, died Friday, February 8, 2013, at his residence. He was born October 13, 1912, in Norwalk, Connecticut to the late Herbert and Harriet (Bennett) Foster. His father was a skilled pattern maker machinist and his mother Harriet a domestic. He grew up in Norwalk, Connecticut and left his school in 10th grade to care for his ill brother, Charles. Chester found first employment at the beginning of The Great Depression in a hat factory, but soon had a job at Standard Safety Razor in Norwalk. Chester followed this business from Norwalk to Plattsburg, NY when the firm became Pal Blade. He met his future wife, Margaret Mary Kay, in the late 1930s but was posted by his company to Buenos Aires, Argentina in 1939, before they could marry. The war years were spent in South America at Pal Blade's factory there. Ending with his call to military service in Mid-1945, he returned just as the war ended and married Margaret. They settled in a new home he helped build on Cumberland Head near Plattsburg. Four of his five children were born in Plattsburg (Robert, Herbert, Linda and Suzanne). During the period 1954-1955 his employer first moved the company to Brooklyn and then, as American Safety Razor Co., to the Shenandoah Valley. The family relocated in the spring of 1955, first to Augusta County near Churchville, and finally to their new home on Grove Lane in Staunton. In 1956, his youngest son, Charles was born at King's Daughter's Hospital. All of his children graduated from Robert E. Lee High School and have gone on to successful lives in various parts of the country. Chester enjoyed ASR's summer break for travel to upstate New York and around the country visiting many of the National Parks. After retirement as a supervisor in tool and die making, he participated in many activities including Model A Ford restorations, building radio control airplanes and boats, becoming a stained glass artisan, and making clocks for the extended family. His travels included trips to Alaska, South America, Indonesia and China. Prior to his death he lived with his daughter Linda in Richmond, VA, and for the past four years with his daughter, Susie in Ft. Defiance. In addition to his wife, Margaret, he was preceded in death by brothers, Charles and Walter Foster; a sister, Harriet Lundgren; and granddaughter, Kay Robinson Foster. He is survived by his children, Robert Foster and wife, Susan, of Canby, Oregon, Herbert Foster and wife, Sammye, of Chesterfield, Virginia, Linda Foster of Richmond, Suzanne Shiflett and husband, Larry, of Fort Defiance, and Charles Foster and wife, Robin, of Little Silver, New Jersey; 6 grandchildren; and two great grandchildren. A memorial service will be held at 7 p.m. Friday, February 15, 2013 at the Henry Funeral Home. Friends may visit with the family after the service. Friends may visit at the residence, 1655 Knightly Mill Road Ft. Defiance, VA. The family is most grateful for the kindness and care provided to our father by Shelia Rankin and to the staff members of the Augusta Health Hospice of the Shenandoah. In lieu of flowers, the family requests that a donation in the name of Chester Foster be made to the Wounded Warrior Project, www.woundedwarriorproject.org. Condolences may be sent to the family at www.henryfuneralhome.net.

The family of CHESTER EDWARD FOSTER created this Life Tributes page to make it easy to share your memories.

Send flowers to the FOSTER family.