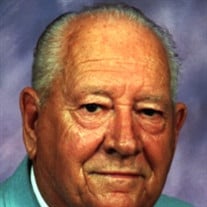 CHESTER O. HARRIS GREENVILLE, VA Chester Oliver Harris, 89, widower of Madeline (Painter) Harris, of 91 Greenville School Road, died Saturday, February 9, 2013, in Augusta Health, Fishersville. He was born August 14, 1923, in Ellard, VA (Cold Springs), a son of the late Howard Hamilton and Ollie (Thompson) Harris. Chester was a husband, father, grandfather, and friend, but first and everlasting a true American who loved his country and was proud to have served in the Army during World War II and Europe, and the Korean War. Prior to retirement, he was employed by DuPont with 37 years of service. He was a lifetime member of Pines Chapel Church. He was a member of Steeles Tavern VFW Post 8279 and AARP. He coached little league for many years. In addition to his wife, he was also preceded in death by two sons, David Oliver Harris and Randall Lamar Harris; three brothers; five sisters; a grandson, Justin L. Harris; and lifelong friend, Ed Landes. Family members include two sons, Gary Harris and daughter-in-law, Joyce, of Buena Vista and Rick Harris and his girlfriend, Gail Holzcer, of Waynesboro; a daughter and son-in-law, Donna and Wayne Gorden of Greenville; four grandsons, Matthew and Mark Harris, R.W. and Michael Gorden; granddaughter, Amanda Bradley; and a great granddaughter, Randi Harris; and lifelong friends, Kenny Conner, Sonny Fitzgerald, Bob Campbell, Gene Thompson, and many others, too numerous to mention. He was the last surviving member of his immediate family. A funeral service will be conducted at 11 a.m. Tuesday February 12, 2013 in Pines Chapel Church by Pastor Isca Mitchell and Roy Fitzgerald. Burial will follow in the Church Cemetery. Military honors will be conducted at the grave by the American Legion Post 340. Active pallbearers will be Matthew Harris, Mark Harris, R. W. Gorden, Michael Gorden, Fred Bower, Larry Harris, Chris Harris, Arnold Lee Fitzgerald, Ronald Rohr, and Doug Painter. Honorary pallbearers will be his nieces and men of Pines Chapel Church and members of the former Steeles Tavern VFW. The family will receive friends from 6 until 8 p.m. Monday February 11, 2013 in the Henry Funeral Home and other times at the residence. The family would like to thank the nursing staff of 2 West/PCU and Dr. John Marsh for their loving care. Memorial contributions may be made to the Pines Chapel building fund, P.O. Box 588 Greenville, VA 24440. Condolences may be sent to the family at www.henryfuneralhome.net

The family of CHESTER OLIVER HARRIS created this Life Tributes page to make it easy to share your memories.