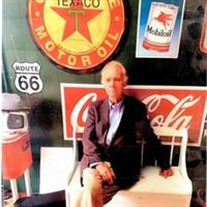 Clyde W. Harris of Devon Road, Staunton left this world October 10, 2019. Clyde was born to Carmen Campbell Harris and Austin Harris on February 4, 1932. Clyde married the love of his life, Ann Back Harris, on July 1, 1955. He is survived by daughter, Lani Harris-Johns and husband, Billy; and sons, Matthew Mark Harris and wife, Kay; Loren Harris and wife, Christina; and his youngest son, Christopher Harris. He is also survived by his grandchildren, Travis Fitzgerald and fiancée`, Katrina Lassiter, and Lindsay Fitzgerald and John Coggin; Amanda and Chuck Rodgers and great grandchildren, Andrew, Abby, Nicholas, and Kristina; Tiffany Scott and great grandchildren, Morgan and Marley; Lezlie and Ryan Nygard and great grandchildren, Nate and Ava; and Matthew and Heather Harris and unborn, Maddison; and youngest granddaughter, Olivia Harris. He was preceded in death by an infant son, Clyde William Harris, II and eldest daughter, Lisa Snyder. He was also preceded in death by three sisters, Margie Toman, Helen Littwin, and Gene Cook. His surviving sister is Louise Henley.  Clyde received an associate’s degree in commercial art and drafting from Washington State in 1951. He joined the U.S. Navy Air Branch in 1952, and was stationed at the Naval Station North Island, California, and Honolulu, Hawaii, serving with the “FAWTUPAC” Fleet All Weather Training Unit Pacific, where he drafted flight plans. He remained active in the Navy reserve until 1960. He attended Bridgewater College in 1994, obtaining a certificate for Set Apart Ministry that he used both with music ministry and his service to CASA.  Upon returning home to Staunton, he worked for Augusta Motors. In 1961, Clyde opened Clyde’s Custom Auto Body in downtown Staunton; the business remains a staple in the town under his son, Mark’s ownership. Even after “retirement”, he continued his love of fast and beautiful cars, working with his son, Loren at Blue Ridge Hot Rods.  Clyde was not a complicated man. He served God, his family, his country, and his community. Clyde loved reading Louis Lamour books and watching Matt Dillon western movies. He was passionate about cars and would share his technical and aesthetic knowledge with anyone and everyone. He loved singing and was a music director for Fifth Street Brethren Church, where he was a member and Sunday School teacher for 25 years. Clyde will be terribly missed by his family and friends, but leaves behind a legacy of love and servitude.  The family will receive friends Friday, October 18th from 6 until 8 p.m. at Henry Funeral Home in Staunton. The memorial service will be held at Thornrose Cemetery, Saturday, October 19th at 11 a.m. The family will also receive friends at various times at Clyde and Ann’s residence on Devon Road. Memorial contributions may be made to St. Jude’s Children’s Research Hospital or the Alzheimer’s Association.

Clyde W. Harris of Devon Road, Staunton left this world October 10, 2019. Clyde was born to Carmen Campbell Harris and Austin Harris on February 4, 1932. Clyde married the love of his life, Ann Back Harris, on July 1, 1955. He is... View Obituary & Service Information

The family of CLYDE W. HARRIS created this Life Tributes page to make it easy to share your memories.