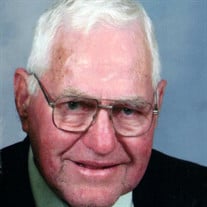 GREENVILLE - Carroll Wayte Swortzel, 95, husband of Violet Bosserman Swortzel, passed away at Shenandoah Hospice House on May 29, 2022. Mr. Swortzel was born on December 3, 1926 in Rockbridge County to the late Harry Wayte and Irene (Lackey) Swortzel. He was a member of St. John’s Reformed Church and served as an elder emeritus and trustee. He was proud to be the owner of a century farm established in 1904. In addition to his wife who he married August 5, 1950, he is survived by a son, Carroll “Mac” Swortzel (Karen Hall); a daughter, Patricia S. Hughes Sensabaugh; two brothers, Charles Edgar and David Eugene Swortzel; six grandchildren, Melodye (Patrick) Paruszkiewicz; Kara (Kristin Holbrook) Hughes, Christopher Hughes, Rachel (Mike) Ashby, Isaac (Stephanie) Swortzel, and Sarah (Dennis) Russell; thirteen great-grandchildren; and numerous nieces and nephews. In addition to his parents, he is preceded in death by two brothers, William and Harry Swortzel; and a sister, Margaret Stump. The family will receive friends from 6 until 8 PM, Wednesday, June 1, 2022 at Henry Funeral Home. A funeral service will be conducted at 11:00 AM, Thursday, June 2, 2022 at St. John’s Reformed Church by Rev. Robert Sherfy, assisted by Rev. Kristin Holbrook and Rev. Dennis Russell. Burial will follow at the church cemetery. Pallbearers will be grandsons and grandsons-in-law. Honorary pallbearers will be nephews and neighbors. In lieu of flowers, memorial donations may be sent to St. John’s Reformed Church Window Restoration.

The family of Carroll W. Swortzel created this Life Tributes page to make it easy to share your memories.

Send flowers to the Swortzel family.