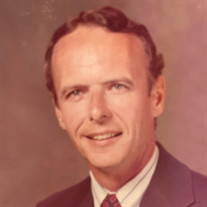 Charles L. Arnold, Jr. “Chuck” peacefully departed this life on Tuesday June 14, 2022 at the age of 87. He has entered into eternal life in heaven due to his strong faith in Jesus Christ and His teachings. He will be laid to rest in Barren Ridge, VA beside his wife of 57 years, the late Eleanor Driver Arnold. He is survived by his two sons, Charles Lewis Arnold III and wife, Anne Dunklee Arnold of Richmond, VA and Samuel Driver Arnold and wife, Debbie Baber Arnold of Ft. Defiance, VA; three granddaughters, Meredith Arnold Moon and husband, Austin Moon of Danville, VA, Jessica and Samantha Arnold of Ft. Defiance, VA; a grandson, Ross E. Shull of Staunton, VA; and a great granddaughter, Dovie Eleanor Moon of Danville, VA. Chuck was the son of the late Louise Follis and Charles Lewis Arnold of Richmond, VA; and was predeceased by his brother Herbert Arnold of Newport News, VA. He graduated from Thomas Jefferson High School in Richmond, VA and then the University of Virginia where he was a standout in baseball at the position of catcher. He held records in batting at both schools and earned All Atlantic Coast Conference recognition while at UVA. He was a member of the Phi Kappa Sigma fraternity and a big supporter of UVA sports and the VSAF. Chuck had a successful 33 year career with McNeil Laboratories, a division of Johnson and Johnson, which located him in Roanoke VA, Nashville TN, and Raleigh NC, before finally settling in Staunton, VA. Chuck lived a full and blessed life filled with world travel, the Arts (Lincoln Center, Carnegie Hall & Broadway shows as some of his favorites), family ski outings and beach trips. He grew up with and had a love for music and in addition he had a special fondness for fine Italian violins. He enjoyed performing with his church quartet and his elusive group “The Seldom Heard”. Especially in his later years he enjoyed the game of golf, but never truly believed in “you drive for show and putt for dough”. He would much rather lace a 300 yard drive then make a 3 foot putt, but he did take great pride in whipping his sons in a little $2 nassau. Friends who wish to memorialize him are invited to contribute to Alzheimer’s Association, 1160 Pepsi Place, Charlottesville, VA 22901 or a charity of your choice. The Arnold family extends many thanks for the kind, loving support that Chuck received at Brightview Baldwin Park in Staunton, VA and to his special friend Carolyn Sellers who helped him through some of his last days. A private graveside service will be held at a later date. Henry Funeral Home is handling the arrangements.

Charles L. Arnold, Jr. &#8220;Chuck&#8221; peacefully departed this life on Tuesday June 14, 2022 at the age of 87. He has entered into eternal life in heaven due to his strong faith in Jesus Christ and His teachings. He will be laid to rest... View Obituary & Service Information

The family of Charles L. Arnold, Jr. created this Life Tributes page to make it easy to share your memories.

Send flowers to the Arnold, family.