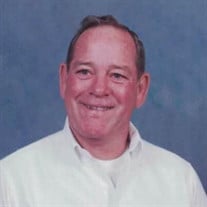 Charles “Bucky” Montgomery Buchanan, 86, formerly of Stuarts Draft, passed away at home in Greenville surrounded by his family Saturday, April 17, 2021 at 6:45 p.m. Bucky was born June 20, 1934 in Brownsburg, son of the late Guy and Gertie Buchanan. Bucky retired from Georgia Bonded Fibers in Buena Vista where he was a truck driver. Bucky loved NASCAR, camping, spending time with family (especially his three great grandkids), working in his garage, farming, and taking care of his cattle with his friend Bill Hunter. In addition to his parents, Bucky is preceded in death by five sisters and two brothers, Estel, Kitty, Polly, Peggy, Dorothy, George R., and Guy Jr. Bucky is survived by his loving wife Judy of 43 years; his daughter, Ann Kellogg and husband Thomas; granddaughter, Ashley Kellogg and boyfriend Matt Cloonan; four great grandchildren, McKinley, Havyn, Ava, and Asher Cloonan; two brothers, Frank Buchanan and wife Ila and Russell Buchanan and wife Doris; and a number of nieces and nephews. A special thanks to his hospice nurse Kaitlyn Wegner, nurse aide Audrey Deese, and his primary care Victoria Tomlin and Dr. Marsh who helped his family take such great care of him. To respect Bucky’s wishes, his body will be cremated and no service will be held. We know he was such a great man with a big heart and he had many friends and family who loved him so the family welcomes any family and visitors to his daughter’s house where Judy is residing at 134 Greenville School Road, Greenville, VA 24440. Memorials may be made to Augusta Health Hospice of the Shenandoah, c/o Augusta Health Foundation, P.O. Box 1000, Fishersville, VA 22939. Henry Funeral Home is handling the arrangements.

The family of Charles "Bucky" Buchanan created this Life Tributes page to make it easy to share your memories.

Send flowers to the Buchanan family.