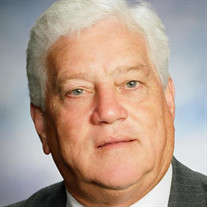 Charles Hubert Huffman, 77, husband of Susan (Cockerham) Huffman, of Mt. Solon, died Sunday, October 11, 2020, in the University of Virginia Medical Center, Charlottesville. He was born October 31, 1942 in Mabscott, West Virginia, a son of the late Hubert Francis and Orpha Ellen (Bowyer) Huffman. He graduated from Alderson High School, and received his Bachelor of Arts in Geography from Morris Harvey College. He received his Master of Arts from Marshall University in Geography, and attended James Madison University, the University of Virginia, and Radford University for other graduate credits, including his administrative certification. He was a former farmer who raised steers and horses, and was involved in education for 44 years as a teacher, coach, and principal, and then an administrator with the Augusta County Schools Central Office. Charles served on the Shenandoah Valley Electric Cooperative board for Augusta/Highland counties since 2005. He was a Director Emeritus. He completed the Credentialed Cooperative Director and had a Board Leadership Certificate. He was an honorary member of the Future Farmers of America at Stuarts Draft High School and Fort Defiance High School. Charles was a past Chairman of the steering committee for the Augusta County Comprehensive Plan. In 2002, he received one of the Dawbarn Awards for Augusta County presented by the Community Foundation of the Central Blue Ridge. In 2009, he was elected to the Hall of Fame at Fort Defiance High School. He was a member of St. Paul’s United Methodist Church where he was a Sunday School teacher and past Chairman of the Church Council, and was Chairman of the finance committee and served on the Board of Ushers. In addition to his wife, family members include a daughter, Ashley Huffman Brulle of Staunton, Virginia; a brother and sister-in-law, Larry D. and Peggy Huffman of Beckley, West Virginia; two sisters, Sylivia Poff of Hillsdale, West Virginia and Mary Ellen Neff of Fayetteville, West Virginia; a sister-in-law and brother-in-law, Elizabeth Cockerham Nicholson and William M. Nicholson of San Antonio, Texas; and a number of nieces and nephews. He was preceded in death by a son, Christopher Charles Huffman, and a grandson, Charles Vanden Brulle. A memorial service will be conducted at 2 p.m. Saturday, October 17, 2020, in St. Paul’s United Methodist Church by the Rev. Ryan Oswald. Burial will be private. Honorary pallbearers will be members of the Adult Fellowship Class and the Board of Ushers. Memorials may be made to St. Paul’s United Methodist Church, Capital Improvement Fund, 2000 Shutterlee Mill Road, Staunton, VA 24401. Henry Funeral Home is handling the arrangements. The family requests that attendees wear masks and practice social distancing. Condolences may be sent to the family online at www.henryfuneralhome.net.

The family of CHARLES HUBERT HUFFMAN created this Life Tributes page to make it easy to share your memories.

Send flowers to the HUFFMAN family.