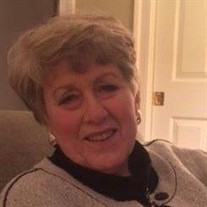 Ann Claiborne Dohs Overbey Elder of Charlottesville, VA passed away on February 2, 2020. She is predeceased by her husband, Thomas Claybrook Elder and her sister Angeline Bullerjahn. She is survived by her son Thomas Claybrook Elder, Jr of Waynesboro; son, Frank Elder, his wife Mollie and their sons, Robert, Patrick, and Wilson; daughter, Ann Claiborne Dandridge, her husband, Vic and their daughters, Claiborne, Peyton and Mae; sister, Mary Ellen Acey and her husband, Basil, of Richmond, Virginia; sister, Alice Murdoch and her husband, Jim, of Shelburne, VT; and her dear companion, Sophie, her Norwich terrier. She was born on September 15,1936 at Schofield Barracks in Oahu, Hawaii. She was the daughter of Lt. Col. Francis Hill Dohs of West Point, NY and Beverly Lacy Hale of Natchez, Mississippi. She graduated from Stuart Hall School in 1953 and attended Mary Baldwin College, Staunton, VA. She was a life-long resident of Staunton and took great pride in her community. She was very active with Augusta Garden Club, having served as president and was awarded Emerita Membership in 2012 for her outstanding service to the club. She received the Flower Arrangement Achievement Award from the Garden Club of America in 2005. In 2003, she was awarded the Distinguished Alumni Award from Stuart Hall School after putting much time, love and energy into acquiring and decorating the Carroll House. Claiborne relished her friends and family and could always brighten a room and entertain a crowd! She loved all things beautiful and could make something ordinary take on new life with her special touch. She especially loved to think outside of the box when flower arranging and was known for her unusual style and talent. She was devoted to her family and had the opportunity to live with her daughter for the past few years which allowed her to form even more special bonds with her children and grandchildren, which was a true gift to all. A memorial service will be held at Trinity Episcopal Church on Saturday, February 8, 2020 at 4:00pm, followed by a reception in the Parish Hall. In lieu of flowers, please consider a memorial donation to the Stuart Hall School, PO Box 210, Staunton, VA 24402. Henry Funeral Home is handling the arrangements.

The family of Claiborne Dohs Elder created this Life Tributes page to make it easy to share your memories.

Send flowers to the Elder family.