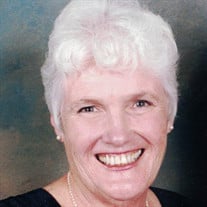 Clare Oakman Noble, 83, widow of William Noble, of Staunton, passed away on Friday, January 3, 2020 at her residence. She was born on May 20, 1936 in Brooklyn, New York, a daughter to the late Robert and Mary (O’Neil) Oakman. She was a teacher at the Cleary School for Deaf in Long Island, New York. Mrs. Noble is survived by two sons, Robert Noble (Nancy Comerford) of New York and William R. Noble (Lisa) of Staunton; two daughters, Jean Ann Persico (Randall) of California and Margaret Mary Garner (Dave) of South Carolina; seven grandchildren and two great grandchildren. In addition to her husband, she is preceded in death by two brothers and three sisters. A memorial service will be conducted at a later date. Family will receive friends from 6:00 - 8:00 PM, on Monday, January 6, 2020 at the son’s residence, 902 Ridgecrest Circle, Staunton. Memorials may be made to Alzheimer’s Foundation of America, 322 Eighth Avenue, 16th Floor, New York, NY 10001 or Hope for Horses, PO Box 1449, Leicester, NC 28748.

The family of Clare O. Noble created this Life Tributes page to make it easy to share your memories.

Send flowers to the Noble family.