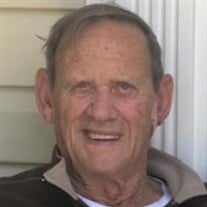 Columbus Eugene “Bump” Hagy, 83, husband of Shirley (Knight) Hagy, of Churchville, died Wednesday, March 4, 2020 at Augusta Health. Bump was the most honest, generous, and loving husband, father, and friend. He never met a stranger in his life. He was born January 31,1937 in Richlands, a son of the late Dave and Rosa May (Ball) Hagy. Mr. Hagy was owner of C. E. Hagy Drywall. He was a member of Elks. Bump was an avid golfer and Redskins fan. In addition to his wife of 57 years, family includes a son, Scott Hagy; a daughter, Teresa Lee; a brother, Clyde Hagy; a sister, Shirley Hewitt; two grandchildren, Derrick Leland and his wife, Bailey and Quentin Lee; two great grandchildren, Cooper and Landry Leland; two brothers-in-law, J.T.Knight and wife, Debbie, and Lucky Knight; a sister-in-law, Thelma Moyers; and a number of nieces and nephews. He was preceded in death by an infant daughter, Linda Diane Hagy and a brother, George Robert Hagy. A funeral service will be conducted at 1 p.m. Tuesday, March 10, 2020 in the Henry Funeral Home Chapel by Pastors Wanda Myers and Gregory Miller. Burial will follow in Augusta Memorial Park. The family will receive friends from 6 until 8 p.m. Monday, March 9, 2020 in the funeral home. Special thanks to the Intensive Care Unit at Augusta Health, most especially the nurses. Memorials may be made to Good News Ministries, Inc., 18 Kerry Lane, Staunton, VA 24401.

The family of Columbus E. Hagy created this Life Tributes page to make it easy to share your memories.

Send flowers to the Hagy family.