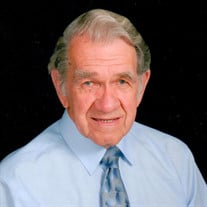 Curtis Lee Carter, 87, husband of Shirley (Cline) Spiggle Carter, of Verona, died Thursday, June 11, 2020, at his residence. He was born October 15, 1932, in Bassett, a son of the late Charlie T. and Lilly (Bryant) Carter. Mr. Carter was a veteran of the U.S. Army. Prior to retirement, he was a certified mechanic for GoodYear with 32 years of service and drove a school bus for 14 years. He was a member of the Verona United Methodist Church where he served as a Sunday School teacher. He was a volunteer with the Verona Fire Department and was a “Jack of all trades”. In addition to his wife, family members include a daughter and son-in-law, Teresa and Ronald Wagner of Martinsville; three step-sons, Richard A. Myers, Jr. and wife, Rose, Kevin Ray Myers, and Robert J. Spiggle; three step-daughters, Joy Tinsley, Florence Parcell and husband, Ben, and Grace Dick; a brother and sister-in-law, George and Ruby Carter; a sister, Eunice Vaughan; one grandchild, Deanna Wagner Tipton and husband, Joey; two great grandchildren, Allee and Asher Tipton; and a number of step-grandchildren and step-great grandchildren. He was preceded in death by his previous wife, Mildred Bell (Humphrey) Carter; a step-son, Jeffrey Spiggle; and a granddaughter, Amanda Wagner. A funeral service will be conducted at 2 p.m. Monday, June 15, 2020, in the Henry Funeral Home Chapel by the Revs. Robert J. Weeks, Ed Pruitt, and Shawna Hiner. Burial will follow in Augusta Memorial Park. Active pallbearers will be Jeff Allen, Dennis Garber, Bee Myers, Steve Sutton, Jerry VanLear, and Bob Shuler. Honorary pallbearers will be members of the Homebuilders Sunday School class. The family will receive friends one hour prior to the service in the funeral home. Memorials may be made to Verona United Methodist Church, P.O. Box 47, Verona, VA 24482. Condolences may be sent to the family at www.henryfuneralhome.net.

The family of CURTIS LEE CARTER created this Life Tributes page to make it easy to share your memories.

Send flowers to the CARTER family.