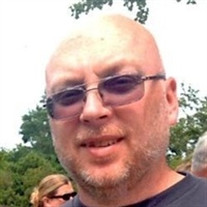 STAUNTON, VA Daniel Eldridge Irvine, 48, husband of Karen (Deskins) Irvine, of 327 Yount Avenue, died Monday, September 16, 2013, at the University of Virginia Medical Center. He was born June 12, 1965, in Fairfield, a son of the late Dannie Eldridge and Phyllis (Simmons) Irvine. He served in the United States Navy from February 1990 until March 1997. Mr. Irvine worked for Wal-Mart Distribution Center in systems control. He was an avid Miami Dolphins fan. He also coached baseball and was involved with his daughter's softball. He was a devoted father and husband and his greatest gift was his daughter. He never met a stranger and will truly be missed. In addition to his wife, family members include a daughter, Tyler-Ann Irvine age 15; a step-daughter, Kylie Sensabaugh Kirby of Goshen; one brother, Roger Irvine of Roanoke; three grandchildren; and numerous cousins, uncles, and aunts. A funeral service will be conducted at 12 noon on Friday, September 20, 2013, in the Henry Funeral Home Chapel by the Rev. Russell Heinrich. Entombment will be in Thornrose Cemetery. Military rites will be given. Active pallbearers will be Chris Painter, Scott Stogdale, Mike Hartless, David Wade, Wil Richard, and Pete Hall. Honorary pallbearers will be friends, family, and co-workers. The family will receive friends from 7 until 9 p.m. Thursday, September 19, 2013, at Henry Funeral Home. Memorials may be made to the Irvine College Fund, 327 Yount Avenue, Staunton, VA 24401. Dan was full of humor and there will be a lot less laughter in the world.

The family of DANIEL ELDRIDGE IRVINE created this Life Tributes page to make it easy to share your memories.

Send flowers to the IRVINE family.