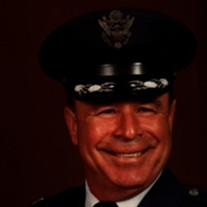 DANIEL L. JAMES, SR. STAUNTON, VA James, Daniel Lee, Lt. Col. USAF (Ret.), of Staunton, Virginia, ended his final "flight" on February 5, 2013. He was born October 22, 1923 in Waynesboro, VA to the late Lonnie Lee and Annie Laura (Via) James. Dan dearly loved his country and his family. During WWII he served in the Army Air Corps as a fighter pilot. Later, He joined the U.S. Air Force to do his part in the conflict in Korea. Dan continued his service to his country for a total of 30 years until his retirement shortly after flying the skies over Vietnam. After retiring from military service Dan operated a farm in Augusta County, VA, and later moved to his last home in Staunton. Dan enjoyed hunting, fishing, using his ham radio, and his computer. In addition to his wife of 68 years, Nell (McCormick) James, family members include two sons, Daniel Lee James, Jr. of Bumpass, and Barry Carlton James and his wife, Jeanne, of Midlothian; a daughter, Melody Beisner and her husband, Daniel, of Ruckersville; a brother Paul A. James and his wife, Ann, of Oilville; two grandchildren, Megan James and her fiancé, Joe Emenheiser, Danell Beisner and her husband, Andrew Creasey; great grandchildren, Cameron Joseph and Marshall Elizabeth Creasey; step grandchildren, Lisa and Larry Friedkin and their children, Nicholas and Jordan and Jacki and Matt Sackett and their children Kyler and Alayna. He was preceded in death by two brothers, Wallace M. James and Lonnie James, Jr.; and a deceased grandson, Carlton Joseph Beisner, February 4, 1996. A funeral service will be conducted at 2 p.m. Saturday, February 9, 2013 at the Henry Funeral Home Chapel by the Rev. Luke Smith. Burial will follow in Thornrose Cemetery. Graveside rites will be conducted by the Augusta- Staunton VFW Post 2216. Family to receive friends from 6 until 8 p.m. Friday, February 8, 2013, at Henry Funeral Home and other times at 332 Rainbow Drive Staunton, VA. Memorials may be made to the building fund at Linden Heights Baptist Church, 371 Linden Drive Staunton, VA 24401 or to the Staunton-Augusta Rescue Squad, 1601 North Coalter Street Staunton, VA 24401. Condolences may be sent to the family at www.henryfuneralhome.net.

The family of DANIEL LEE JAMES, SR. created this Life Tributes page to make it easy to share your memories.

Send flowers to the JAMES, family.