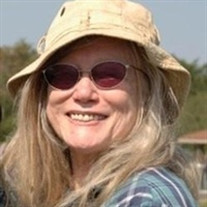 HONOR B. JOHNSON STAUNTON, VA Honor Blanchard Johnson, passed away, May 12, 2013, at AHC after fighting Alzheimer's. Since the Autumn of 2011 she had been living at Envoy of Staunton, with her husband of 52 years living at their home in Front Royal, VA. She is survived by her husband, Wayne, her sister-in-law, Judy Lust and husband, Bill, of Verona and two cousins, Tracy Gonzales y Castro of Madrid, Spain and Leona Ponish of Corpus Christi, Texas. Honor was born in Alexandria, Louisiana and attended Bolton High School there. She was also a graduate of and held degrees in Fine Arts, Humanities, Printmaking and Creative Writing from the University of Texas (Austin), the San Francisco Art Institute (BFA & MFA) and San Francisco State University (MA). In addition she holds an Adult Education Credential from Sane Jose State. She also attended Rice University studying Philosophy and Physics and UCLA Graduate School of Education (Philosophy of Ed. - ABD). During her recovery from breast cancer, she completed most of the curriculum requirements for an undergraduate Engineering degree from Canada College in Redwood City, CA. Her teaching experience includes the San Francisco Art Institute, Marin Co., San Mateo and Palo Alto School Districts, San Jose State University, James Madison University and Marymount University in Virginia. In 1985 she received the Anne Sexton Award in poetry and her poetry was published in Massachusetts Quarterly, Panjandrum, Foothill Quarterly, Coastlight and several small presses. There exists today from two to three thousand manuscripts unpublished and unedited journals, poems and short stories. Her art work includes hundreds of pastels, paintings, photographs, etchings, drawings and watercolors in completely unique and innovative style, most often compared with Brueghel and Bosch. Many of her paintings and prints were visually close to the "Visionary" Movements in San Francisco of the 1960s and 70s. Honor was active in the Civil Rights, anti-Viet Nam War, and Women's Rights movements. There were few living creatures in the world that Honor did not love and care for, especially her canine and feline companions. Services will be private and held in Staunton, VA. Contributions in her name may be made either to the American Cancer Society or the Alzheimer's Association. Anyone interested in owning or collecting samples of her visual work should contact Judy Lust of Verona, VA.

HONOR B. JOHNSON STAUNTON, VA Honor Blanchard Johnson, passed away, May 12, 2013, at AHC after fighting Alzheimer's. Since the Autumn of 2011 she had been living at Envoy of Staunton, with her husband of 52 years living at their home in Front... View Obituary & Service Information

The family of HONOR DEMING JOHNSON created this Life Tributes page to make it easy to share your memories.

Send flowers to the JOHNSON family.