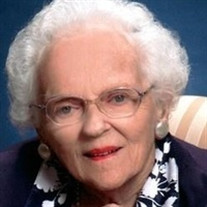 DOROTHY L. MITCHELL STAUNTON, VA Dorothy Langslow Mitchell, 91, died Friday, Decmeber 2, 2011 in Staunton. She was born March 7, 1920 in Somerset County, Maryland, daughter of the late Horace and Lena (Harris) Langslow, lived in Newport News, VA for over 80 years, before moving to Staunton to live with her daughter, Carolyn for the last 8 years. Dorothy was preceded in death by beloved husband, Sydney "Mike" Mitchell, also by two sisters, Mary Langslow Nelson and Charlotte Langslow Bjerke, and brother, Philip Lee Langslow. Family members include her daughter and son-in-law, Carolyn and Allen Hensley of Staunton; daughter and son-in-law, Lorraine and Richard Magnuson of Raleigh, NC. She was the cherished grandmother of Steven Rowe and wife, Yong, of Huntsville, AL; John Rowe of Cary, NC; Michael Hensley of Washington, DC; Christopher Hensley and husband, Doug Steenhuisen, of Washington, DC; Robin Hensley and husband, Jeff Graves, and great grandmother to their two sons, Jackson Sydney and Samuel Layton Graves; sister-in-law, Adella June Langslow; numerous cousins, nieces, and nephews. In Newport News, Dorothy was a member of Morrison Methodist Church, where she was active in teaching Sunday School, Circle, sewing group, arranging flowers for the sanctuary, and serving on many committees, including the Official Board. Bird watching was her other passion. Her husband, Mike, founded the Hampton Roads Bird Club in 1951 where they were members. Dorothy often served as an officer for the club and was editor of the newsletter. She led bird walks every other Sunday morning at the Newport News City Park for years and helped check the 147 bluebird boxes, which the Bird Club had placed at the park's golf course and arboretum. Over 300 new bluebirds were banded each year for the past 20 years. Dorothy and Mike became bird banders for the US Fish and Wildlife Department, and she was the first female bander in the state of Virginia. In 30 years, they banded over 108,000 birds. Dorothy and Mike photographed different species of birds captured for banding. With these pictures, Dorothy presented approximately 200 slide programs each year to schools and other community groups in the Tidewater area. She was affectionately known as the "Bird Lady of Newport News." After Mike's death, Dorothy wrote a bird book, "All About Birds," illustrated with their slides. In 1963, Dorothy and five other birders were instrumental in founding a bird banding station in Kiptopeke, Virginia. This was later named the Coastal Virginia Wildlife Observatory. She and other volunteers would capture, examine, weigh, band and release resident and migratory birds in September and October of each year. It is the second-largest running station of its kind in North America, and is almost 50 years old. In Staunton, Dorothy was a member of Covenant Presbyterian Church and the Night Circle. She was a life member of the Hampton Roads Bird Club, a life member of the Virginia Society of Ornithology, and a member of the Staunton Augusta Bird Club. A memorial service will be conducted at 2 p.m. Saturday, December 10, 2011, in Covenant Presbyterian Church by Pastors John Peterson and Amy Summers-Minette. A memorial service will be conducted at a later time in Newport News, VA. In lieu of flowers, memorial contributions could be made to: Coastal Virginia Wildlife Observatory (http://www.cvwo.org/songbirdClubs.php) or Hampton Roads Bird Club, c/o Richard Hudgins, 803 Riverside Drive, Newport News, VA 23606 (hamptonroadsbirdclub.org). Henry Funeral Home is handling the arrangements. Relatives and friends may send condolences, share memories, and sign the guest registry book online at www.henryfuneralhome.net.

The family of DOROTHY LANGSLOW MITCHELL created this Life Tributes page to make it easy to share your memories.

Send flowers to the MITCHELL family.