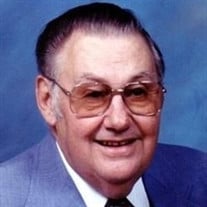 DOUGLAS C. WINE STAUNTON, VA Douglas Clayton Wine, 89, widower of Louise (Garland) Wine, of 314 Rainbow Drive, died Saturday, July 16, 2011, in the Augusta Nursing and Rehab Center, Fishersville. He was born December 24, 1921, in Augusta County, a son of the late Clayton and Ruth Wine. Prior to retirement, Mr. Wine was employed by DuPont with 48 years of service as a Senior Engineer. He then served 13 years on the Staunton City Council. He was active in the Republican Party for a number of years. He was a member of Third Presbyterian Church, where he served as an Elder and Sunday School teacher. In addition to his wife of 65 years, he was also preceded in death by a son, Douglas C. Wine, II; a sister, Nancy Chauncey; two brothers, Rudy Wine and Eugene Wine; a half-brother, Gerald Brown; and a niece, Pam Wilson. Family members include a brother, Jack Wine of Waynesboro; a sister-in-law, Lenora Wine; a special nephew, Michael Chauncey; and a number of nieces and nephews. A funeral service will be conducted at 11 a.m. Wednesday, July 20, 2011, in the Henry Funeral Home Chapel by the Rev. Joe Brandon. Burial will follow in Thornrose Cemetery. Active pallbearers will be Bernie Robertson, Ed Quillen, Charles Layman, Mike DiGrasse, Rocky Flesher, and Carl Garland. Honorary pallbearers will be Elders of Third Presbyterian Church. The family will receive friends from 7 until 8:30 p.m. Tuesday, July 19, 2011, in the funeral home. Memorials may be made to Third Presbyterian Church, 1313 Barterbrook Road, Staunton, VA 24401.

The family of DOUGLAS CLAYTON WINE created this Life Tributes page to make it easy to share your memories.

Send flowers to the WINE family.