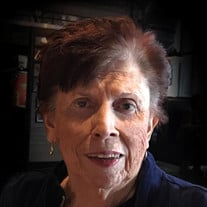 STAUNTON… Deborah Jean (Irwin) Fleagle, 92, widow of George P. Fleagle, passed away on Friday, September 24, 2021 at Brightview Senior Living with her loving daughters by her side. She was born on August 19, 1929 in Philadelphia, PA to the late William F. and Eleanor (Flood) Irwin. After graduating from Friends Select High School in Philadelphia, where she competed in field hockey, tennis and basketball, Debbie continued her education and athletic pursuits at Moravian College for Women in Bethlehem, PA. During the summer of 1949, she jumped at the opportunity to travel on a plane for the first time to visit a classmate’s family in Cuba. Debbie’s many eloquent letters to her parents from that trip are a family treasure that display her love of travel, friends, family and life. Her passion for reading and writing led her to graduate with a B.A. in English in 1951. During her junior year at Moravian, Debbie met the love of her life, George, at a fraternity social at nearby Lehigh University. After marrying in 1952, they moved to Baltimore where George was stationed in the U.S. Army for two years. They would go on to live in Pennsylvania, Kentucky, and Missouri, finally settling down in Fanwood, NJ in 1963 to raise their two daughters. The family was known for their many “Fleagle Adventures” and traveled extensively throughout North America as well as many trips to Europe. In 1988, George and Debbie moved to Lake of the Woods in Locust Grove, VA where they enjoyed boating, tennis, golf, bridge, and other activities with many beloved friends. Their love of travel took them to Australia, New Zealand, Alaska, Vancouver and much of the west coast. After George’s passing in 1997, Debbie continued to feed her adventurous spirit by traveling to an additional 10 countries with family and friends. Debbie’s passion for music inspired many trips to the opera and musical theatre productions across the country and abroad. Debbie’s professional career included college admissions recruiter, travel agent, and banking. However, her greatest love was being a preschool teacher in Fanwood and Locust Grove. A lifelong volunteer, many organizations counted on Debbie’s leadership and enthusiasm. She enjoyed her time as a Girl Scout leader, PTA president, Sunday School teacher, member of the Fanwood-Scotch Plains College Club and Fanwood-Scotch Plains Service League, docent at various museums, and board member for numerous other committees. Debbie never met a stranger and was a friend to all. She always spoke the truth and her confidence carried her through life. She had a great sense of humor and loved to laugh. Curious and eager to learn new things, Debbie was always looking forward to her next adventure. She never wanted to miss an opportunity to meet new people or lend a helping hand, which kept her young in heart and mind her entire life. In 2013, Debbie relocated to Chancellor’s Village in Fredericksburg, VA. In 2019, Debbie moved to BrightView Baldwin Park to be closer to her oldest daughter. Debbie treasured every moment with her grandchildren and loved being there for all their important milestones. Everything Debbie did was with her family in mind. She is survived by her daughters, Melanie Humphries (Tim) of Waynesboro, VA and Amy Guns (Arthur) of Asbury, NJ; and her wonderful grandchildren whom she loved so much, Kimberly Mumbauer (Tim) of Broadway, VA, Hillary Humphries of Fishersville, VA, Christopher Guns of Somerville, NJ, and Kelcie Guns of New York, NY; and many cousins and close friends. A graveside service will be held at a later date at Culpeper National Cemetery. In lieu of flowers, memorial donations may be made to St. Jude at http://giftfunds.stjude.org/Debbie_Fleagle.

STAUNTON&#8230; Deborah Jean (Irwin) Fleagle, 92, widow of George P. Fleagle, passed away on Friday, September 24, 2021 at Brightview Senior Living with her loving daughters by her side. She was born on August 19, 1929 in Philadelphia, PA to... View Obituary & Service Information

The family of Deborah J. Fleagle created this Life Tributes page to make it easy to share your memories.

Send flowers to the Fleagle family.