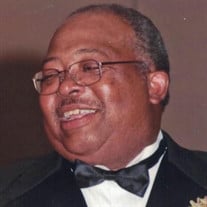 Donald Eugene Henderson, Sr., 71, husband of Avis (Ellis) Henderson, of Verona, died Tuesday, January 5, 2021 at his residence. He was born July 13, 1949 in Winston-Salem, North Carolina, a son of the late Moses and Johnnie Mae (Henderson) Adams. Donald was employed by Shenandoah Trucking. Mr. Henderson was a devout Jehovah’s Witness. In addition to his wife, family includes two sons, Donald E. Henderson, Jr. and wife, Lora Selman, and Michael Chiles and fiancée, Diana Punnara; a daughter, Jeannine Henderson-Lebbie and husband, Samuel; a sister, Minnie Harris; a grandson, Michael Lebbie; and a host of nieces and nephews. In addition to his parents, he was preceded in death by a daughter, Shantae Henderson and his brother, Conrad Henderson. A graveside service will be conducted at 1 p.m. Saturday, January 9, 2021 at Oak Lawn Mausoleum and Memory Gardens by the Rev. Russell Heinrich. The family will receive friends from 4 until 8 p.m. Friday, January 8, 2021 in the Henry Funeral Home. Condolences may be sent to the family at www.henryfuneralhome.net.

The family of Donald E. Henderson Sr. created this Life Tributes page to make it easy to share your memories.

Send flowers to the Henderson family.