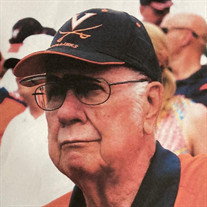 Donnie Denton Meeks, 86, of Fishersville, passed away on Monday, April 11, 2022 at his residence. He was born on October 6, 1935, the son of Hampton Cline and Margaret Elizabeth Meeks. He was raised in Barren Ridge and graduated from Wilson Memorial High School in 1953 where he lettered in basketball. Following graduation, he served in the Army National Guard, receiving an honorable discharge on March 4, 1960. He worked in the automobile business for more than 30 years before retiring from Paul O’Baugh Ford in 2002. Following his retirement, he enjoyed traveling, playing golf, visiting with his grandchildren and great-grandchildren and rooting for his beloved Virginia Cavaliers. He was a proud season ticket-holder for the Virginia Men’s Basketball Team and was never happier than when watching a game with Suzanne. He exemplified the Five Pillars: Humility, Passion, Unity, Servanthood and Thankfulness. In addition to his parents, he was preceded in death by his first wife, Carolyn, on June 13, 2002 and a brother-in-law, David McAllister, on September 16, 2016. He is survived by his wife, Suzanne; his sister, Janet McAllister of Verona; his daughter, Donna Peduto and her husband, Mark of Staunton; his son, David and his wife, Kara of Waynesboro; three grandchildren; Brian Peduto, Amanda Halsey and her husband, T.J., and Claybourne Meeks; three great-grandchildren, Kailey, Aubree and Brooklynn; two brothers-in-law, Steve Pusey and his wife, Diana of St. Augustine, Florida, and Scott Pusey and his wife, Diane, of Manassas, Virginia; and numerous nieces and nephews. There will be no viewing. A celebration of Donnie’s life is planned for 2 p.m. Saturday, April 23, 2022 at Memorial Baptist Church. In lieu of flowers, please make a donation in Donnie’s name to Hospice of the Shenandoah, c/o Augusta Health Foundation, P.O. Box 1000, Fishersville, Virginia 22939. The family would like to extend its sincere thanks to the staff of Augusta Heath, Hospice of the Shenandoah and the Shenandoah House who comforted and cared for Donnie in his final weeks and days. In his last hours, Donnie reflected on his time at Shenandoah House and those who had helped him at the end of his journey. He said of you, “Those are the nicest people I’ve ever met.”

Donnie Denton Meeks, 86, of Fishersville, passed away on Monday, April 11, 2022 at his residence. He was born on October 6, 1935, the son of Hampton Cline and Margaret Elizabeth Meeks. He was raised in Barren Ridge and graduated from Wilson... View Obituary & Service Information

The family of Donnie Denton Meeks created this Life Tributes page to make it easy to share your memories.

Donnie Denton Meeks, 86, of Fishersville, passed away on Monday,...

Send flowers to the Meeks family.