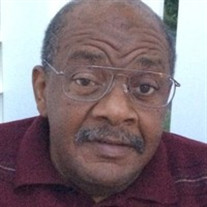 Staunton, VA... Douglas Mitchell Carter, 67, of Staunton, passed away on Friday October 11, 2019 at Shenandoah Hospice House. He was born on March 13, 1952 in Staunton, a son of the late Roger Alexander, Sr. and Mable (Maupin) Carter. Prior to retirement, Doug was employed for over 30 years in the Staunton City School System, where he was a teacher and head football coach at Lee High School. Doug was a 1971 graduate of Robert E. Lee High School. He went on to graduate from North Carolina State University, where he excelled in Football, having been coached by Lou Holtz. He was proud to have played in two Peach Bowls, one Liberty Bowl, and one Astro Blue Bonnet Bowl. He attended a year of Post-Grad at Augusta Military Academy as well. Doug served the Staunton community for many years. He was active on the board of the African American Heritage Festival, the Festival of Holiday Lights, a member of the Valley Football and Basketball Referee Association, as well as a curator at the Augusta Military Academy Museum. He is survived by his companion of 30 years, Connie Spitler; two brothers, Roger Carter, Jr. and wife Elizabeth, of Silver Spring, MD, Preston Carter and wife, Jennifer of Staunton; two special friends, Cathy and Carter Lively; two special dogs, Tino and Phillip; and numerous special nieces, nephews, and cousins. In addition to his parents, he was preceded in death by two brothers, Thomas and Maurice Carter; and a sister, Marion Smith. A Celebration of Life will be conducted at 1 p.m. on Wednesday, October 16, 2019 at the Henry Funeral Home Chapel. Burial will follow in Oak Lawn Mausoleum and Memory Garden. The family will receive friends from 6-8 p.m. on Tuesday October 15, 2019 at Henry Funeral Home. Active Pallbearers will be Warren Fleming, Russell Wells, Davy Crawford, Chase Hughes, Tom McPherson, Clinton Davis, and Jarrett Hatcher. Honorary Pallbearers will be friends from Augusta Military Academy and former colleagues from Lee High School. The family would like to thank the nurses and staff of the Shenandoah Hospice House for their kindness and care.

Staunton, VA... Douglas Mitchell Carter, 67, of Staunton, passed away on Friday October 11, 2019 at Shenandoah Hospice House. He was born on March 13, 1952 in Staunton, a son of the late Roger Alexander, Sr. and Mable (Maupin) Carter. Prior... View Obituary & Service Information

The family of Douglas Mitchell Carter created this Life Tributes page to make it easy to share your memories.

Send flowers to the Carter family.