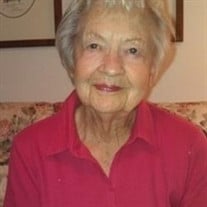 EDITH T. KINCHELOE STAUNTON, VA Edith Barton (Tutwiler) Kincheloe, 94, widow of Jack Evans Kincheloe, of 2103 Poplar Street, died Friday, November 1, 2013, in King's Daughters' Nursing and Rehab Center. She was born January 3, 1919, in Swoope, VA. Her early life was spent in Mt. Crawford. She was the daughter of the late Otis H. Tutwiler and Lillian Bauserman Tutwiler. She graduated from Bridgewater High School, Bridgewater, Virginia and Dunsmore Business College in Staunton, VA Prior to her retirement she was employed by the Staunton News Leader for 21 years. She was an active member of Second Presbyterian Church with an Honorary Life Membership from the Presbyterian Women. She served as elder, was active in the women's Circle and Sunday school. She also volunteered with Meals on Wheels and at Augusta Health. In addition to her husband, she was also predeceased by her eldest son, Robert Evans Kincheloe and son-in-law, Gary Evans Long. Survivors include two sons and daughters-in-law, Steve and Linda Kincheloe and Alan and Sharon Kincheloe; a daughter, Karen K. Long and her special friend, Milton Harris, all from Staunton; a daughter-in-law, Kathie Kincheloe of Waynesboro; six grandchildren, Wesley Kincheloe, Chris Kincheloe and wife, Megan, Rachael Freeman and husband, Clay, Nevin Kincheloe, Katie Kincheloe, and Zachary Long; seven great-grandchildren, Kayla Dudley, Cameron Kincheloe, Haden and Chase Freeman, Madison and Hannah Kincheloe, and Graycie Kincheloe; three sisters and a brother-in-law, Ruth and Jim Harris of Sebring, Florida and Marie Chaplin and LaVan Linhoss, both of Bridgewater; and a number of nieces and nephews. Edith loved the Lord with all her heart, soul, and mind. She shared her heart for Jesus with everyone she met and you were blessed to have spent time in her peaceful presence. She loved unconditionally and was a true Proverbs 31 woman clothed with strength and dignity and a provider for her family in countless ways, never lacking in love. A funeral service will be conducted at 11 a.m. Tuesday, November 5, 2013, in the Henry Funeral Home Chapel by the Rev. Harry Johns. Burial will follow in Augusta Memorial Park. Active pallbearers will be her grandsons. Honorary pallbearers will be her grandchildren and great grandchildren. The family will receive friends from 6 until 8 p.m. Monday, November 4, 2013 in the funeral home and all other times at her daughter's, Karen Long, 12 Baldwin Dr., Staunton, VA.

The family of EDITH BARTON KINCHELOE created this Life Tributes page to make it easy to share your memories.

Send flowers to the KINCHELOE family.