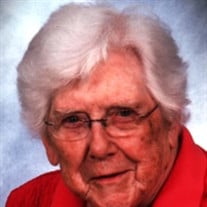 ELEANOR S. WAGNER STAUNTON, VA Eleanor Stratton (Shaner) Wagner, of Staunton, VA, passed away on Monday, February 4, 2013 at King's Daughter's Nursing and Rehab Center. Mrs. Wagner was born on May 25, 1920, in Natural Bridge, VA to the late Sandy and Anna Shaner. Mrs. Wagner was a member of Christ United Methodist Church and had faithfully served her church in many ways over the past years. She was a Sunday School teacher especially proud to have started the Seekers Sunday School class. She was a Lay Leader and held most all local church offices. She was active in the United Methodist Women. Besides offices in the local unit, she served in the District, Conference and Southeastern jurisdiction offices. On January 11, 1941 she married Francis Owen Wagner who preceded her in death on April 21, 1983. Family members include her three children, Rita W. Watkins and her husband, Edward, Zoe S. Jones and the late Bill Jones, Jeffery Owen Wagner and his wife, Jackie. Also surviving are four grandchildren; nine great-grandchildren; and two sisters, Katherine Dillon and Lelia Lightner and her husband, Robert. A funeral service will be conducted at 11 a.m. Thursday, February 7, 2013 at Christ United Methodist Church by the Rev. Robert A. Edwards. Burial will follow in Thornrose Cemetery. The family will receive friends from 6 until 8 p.m. Wednesday, February 6, 2013 at Christ United Methodist Church. In lieu of flowers the family requests that donations be made to Christ United Methodist Church in memory of Eleanor, 1512 Churchville Avenue Staunton, VA 24401 or to a charity of their choice. Condolences may be sent to the family at www.henryfuneralhome.net.

The family of ELEANOR SHANER WAGNER created this Life Tributes page to make it easy to share your memories.

Send flowers to the WAGNER family.