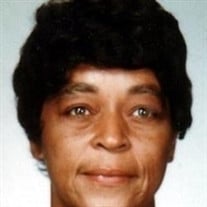 EMMA J. WILLIAMS SWOOPE, VA Dr. Emma Lee (Jackson) Williams, 79, wife of Joseph Williams, of 1481 Buffalo Gap Highway, died Sunday, May 22, 2011, at Augusta Health, Fishersville. She was born September 5, 1931, in Staunton, a daughter of the late Albert, Sr., and Sadie (Woods) Jackson. Dr. Williams received her doctrine from the University of Massachusetts. Prior to retirement she was employed by the High School of Commerce in the City of Springfield, Mass. The high school auditorium was named after her. In addition to her husband, family members include three sisters, Barbara Brown and Margie Carter, both of Charlottesville, and Mary Christian of Staunton; special nieces, Candace L. Jones and Barbara Lebron, both of Staunton and Sylvia Brown of Charlottesville; and numerous nieces and nephews. She was preceded in death by a brother, Albert "Topsie" Jackson, Jr.; two sisters, Nettie Williams and Helen "Kitty" Jackson. A memorial service will be conducted at 1 p.m. on Friday, May 27, 2011, in the Henry Funeral Home Chapel by the Rev. Michael Turner. The family will receive friends from 7 until 8:30 p.m. Thursday, May 26, 2011, in the funeral home. Memorials may be made to the Alzheimer's Association, Central and Western Virginia Chapter, 1160 Pepsi Place, Suite 306, Charlottesville, VA 22901.

The family of EMMA LEE WILLIAMS created this Life Tributes page to make it easy to share your memories.

Send flowers to the WILLIAMS family.