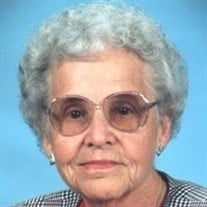 GENEVA S. SMILEY STAUNTON, VA Geneva Smith Smiley, 96, widow of Charles Edgar Smiley, of 900 Maple Street, died Saturday, May 11, 2013, at Augusta Nursing and Rehabilitation Center. She was born on March 28, 1917, in Highland County, a daughter of the late William Thomas Smith and Mary (Crummett) Smith. Prior to retirement Mrs. Smiley was employed by Tommies Pajama Factory. She was a long-time member of Second Presbyterian Church, Staunton. Mrs. Smiley was an accomplished seamstress and after retiring she continued her sewing services to friends and family. She was a devoted caring wife, mother, grandmother and great grandmother. She deeply cared for animals, garden work, and loved her TOPS friends. Left to cherish her memory is her only child, a daughter, Mary S. McNamara, with whom she resided; her granddaughter, Sharon McNamara Morris and husband Michael of Stuarts Draft; a grandson, John F. McNamara, IV and wife Teresa of Stuarts Draft; her great grandchildren, Ellen and Andrew Morris and Katy and Jack McNamara, all of Stuarts Draft. In addition to her husband, she was preceded in death by a sister, Annie Smith and a brother, Jack Smith. A funeral service will be conducted at 2 p.m. on Wednesday, May 15, 2013, in the Henry Funeral Home Chapel by the Rev. Harry Johns. Burial will follow in Oak Lawn Mausoleum and Memory Gardens. The family will receive friends from 6 until 7:30 p.m. on Tuesday, May 14, 2013, at the Funeral Home. The family would like to send a special thank you to Dr. David Chernoff and the staff at Augusta Nursing and Rehab. In lieu of flowers, please send memorial gifts to the SPCA, P.O. Box 2014, Staunton, VA 24402 or to Second Presbyterian Church, P.O. Box 175, Staunton VA 24401.

The family of GENEVA EVANGELINE SMILEY created this Life Tributes page to make it easy to share your memories.

Send flowers to the SMILEY family.