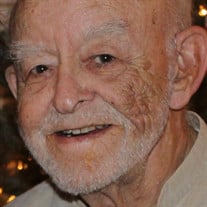 Earl Locklear, of Sunnyside Retirement Community, passed away peacefully on the morning of March 21, 2020 at the age of 91. He was a proud member of the Lumbee Tribe of North Carolina. He is survived by his loving wife of 62 years, Janet Locklear, also of Sunnyside. Earl was born in Robeson County, NC on January 25, 1929, the youngest of seven children to Julius Locklear and Annie Sampson Locklear. Growing up during the Great Depression, his early years were spent on the family farm, living off the land, learning to cultivate and harvest cash crops like cotton and tobacco and developing an appreciation for the value of education. Upon graduation from Pembroke High School, Earl enlisted in the United States Air Force, where he trained in policing and security, and was assigned to the Military Police. He proudly served in a number of stateside locations but was most fond of his time serving as a Staff Sergeant on the security forces in the Marshall Islands during post WWII nuclear testing. Following his time in the military, Earl moved to Richmond, Virginia where he worked for Dupont and the local YMCA while attending college classes at the Richmond Professional Institute (now VCU). He graduated from RPI with a degree in Business and Education and accepted a position teaching Distributive Education at Robert E Lee High School in Staunton, Va. It was there that Earl met and married Janet, where they would raise their family and where he would work his entire career. Earl went on to earn a Master’s degree in Education from the University of Virginia and moved from teaching to public school administration. Over his career, he would serve many years as an elementary school principal and finished his career in the school board office supervising services for the community’s special needs students. Earl and Janet retired to Wilmington, NC in 1998 to be close to their grandchildren and to enjoy the coastal lifestyle. Earl will be remembered as a gregarious member of the community, a faithful servant of the Lord and a friend to all. He and Janet were dedicated members of Covenant Presbyterian Church in Staunton and Little Chapel on the Boardwalk in Wrightsville Beach. He loved music, especially singing in the church choir and his tastes ranged from Beethoven to Elvis. He was fondly known by his close friends as “Lock” and “Earl the Pearl”. Earl was a fitness advocate years ahead of his time and loved volleyball, handball and golf. He was an avid fisherman his entire life and has many trophies to his credit. In addition to Janet, Earl is survived by his older brother Ralph Locklear and wife Sue of Fresno, Ca., sons Kent and wife Cindy of Wilmington, NC and Mark of Pinehurst, NC, and daughter Valerie and husband Doug Rohr of Verona, Va. Also surviving are his grandchildren, of which he was most proud, Rachel, Jacob and Caroline Locklear of Wilmington and Jackson and Avery Locklear of Pinehurst. Earl leaves behind many nieces and nephews who also brought him great joy. The family is so very appreciative of all the staff at Sunnyside, most especially the dedicated and caring staff of Health Care 2nd Floor, who have loved on our Earl over these recent months. In light of the current situation there will be no services however the family plans to honor Earl’s request of a memorial “mixer” at a later date. In lieu of flowers, please consider a donation to one of Earl’s favorite organizations; the National Museum of the American Indian, the Wounded Warrior Project or your local chapter of The First Tee. Henry Funeral Home is handling the arrangements. Condolences may be sent to the family at www.henryfuneralhome.net.

Earl Locklear, of Sunnyside Retirement Community, passed away peacefully on the morning of March 21, 2020 at the age of 91. He was a proud member of the Lumbee Tribe of North Carolina. He is survived by his loving wife of 62 years, Janet Locklear,... View Obituary & Service Information

The family of EARL LOCKLEAR created this Life Tributes page to make it easy to share your memories.

Send flowers to the LOCKLEAR family.