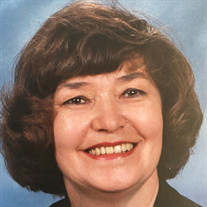 Edeltraud “Eda” Emma Caroline (Protil) Glover, 76, widow of Thomas Allen Glover, died Thursday, December 12, 2019, at her residence. She was born December 20, 1942, in Yugoslavia, a daughter of the late Wendelin and Hermine (Willner) Protil. She lived in Austria and Belgium before coming to the United States in 1956. Mrs. Glover retired from Western State Hospital. She was a member of Hermitage Presbyterian Church where she taught Sunday School, was head of the Women of the Church and sang in the choir. In addition to her husband, she was also preceded in death by a son, Allen Dale Glover. Family members include two daughters and sons-in-law, Christine Marie and Nevin Pilson and Julie Anne and Rick Yeomans; a daughter-in-law, Mary (Stevens) Glover; two brothers, Karl Protil and Manfred “Fred” Protil; a sister and brother-in-law, Brigitte and James Sensabaugh; eight grandchildren, Abigael Nicole and Gabriel Patrick Glover, Matthew Nevin and Hannah Elizabeth Pilson, Richard Anthony, III, Merab Kathleen, Rachel Sophia, and Nathanael Thomas Yeomans. A memorial service will be conducted at 2:00 p.m. on Sunday, December 15, 2019, at Hermitage Presbyterian Church by the Rev. Dr. Wray Sherman. Burial will be private. Honorary pallbearers will be the Women of the Church. The family will receive friends following the service. Henry Funeral Home is entrusted with arrangements.

The family of Eda P. Glover created this Life Tributes page to make it easy to share your memories.

Send flowers to the Glover family.