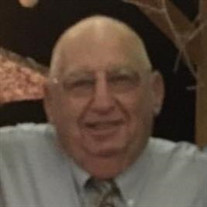 Edward Lefevre Wrenn, 85, widower of Shirley Marie (Jones) Wrenn, passed away on Sunday, March 13, 2022 at his residence. Mr. Wrenn was born on July 17, 1936 in Weyers Cave to the late Leroy Ellis and “Ruth” Juanita (Furr) Wrenn. He was a veteran of the U.S. Army National Guard of Virginia and was a member of Stuarts Draft Christian Fellowship. He was a member of the Middlebrook Ruritan Club for over 40 years and the former Chief of the Middlebrook Fire Department. He is survived by his son, Dale Edward Wrenn (Ruth); his daughter Cynthia Wrenn East; his grandchildren, Steven Branch, David Wrenn, Wendy Fitzgerald, Stephanie Branch, Sara Elizabeth Boshers, and Mary East Lynn; fifteen great-grandchildren; and one great-great-grandson. He is also survived by a special brother-in-law and sister-in-law, Edward R. Jones and his wife Jane. In addition to his wife and parents, he was preceded in death by his daughter, Debra Kay “Debbie” (Wrenn) Branch; his brother, Beverley Franklin Wrenn; and his grandson, Brian E. Wrenn. The family will receive friends on Thursday, March 17, 2022 from 6:00 until 8:00 P.M. at Henry Funeral Home. A funeral service will be conducted on Friday, March 18, 2022 at 11:00 A.M. at Stuarts Draft Christian Fellowship by Pastor Bruce Swartz. Burial will follow at Augusta Memorial Park. Active pallbearers will be David Wrenn, Steven Branch, Brendan Kehrley, Dustin Fitzgerald, Michael Lynn, and Justin Boshars. Arrangements are being handled by Henry Funeral Home. Condolences may be made to the family online at www.henryfuneralhome.net.

The family of Edward L. Wrenn created this Life Tributes page to make it easy to share your memories.

Send flowers to the Wrenn family.