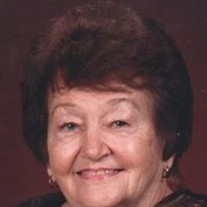 FRANCES M. HEIZER GREENVILLE, VA Our loving mother, Frances Evelyn (Bradley) Moneymaker Heizer, 90, of Greenville, went to be with her Lord and Savior Sunday, March 31, 2013, at her residence. She was surrounded by her daughters and granddaughter, Dawn Brown, who devoted their days and nights to her care. She was born on October 13, 1922, in Pekin, to the late Eugene and Rena (Anderson) Bradley. Prior to retirement, she worked for Genesco for 31 years. She was a member of Greenville United Methodist Church and the adult Sunday school class. She was the oldest mother in the church. Family members include six daughters and five sons-in-law, Anne and Richard Humphries of Greenville, Phyllis and Melvin Hays of Greenville, Judy Strickler and Junior Brown of Staunton, Ruth and Wayne Varner of Mt. Solon, Linda and Roger Harris of Stuarts Draft, and Carolyn Brown of Staunton; four sisters, Hester Brooks, Betty Harris, Annie Johnson, Dickie Kemp; nine grandchildren, Randy Humphries, Sandra Mann, Mickey and Mark Strickler, Lisa Varner, Greg Varner, Brian and Eric Harris, and Dawn Brown; three step-grandchildren, Sabrina, Heith, and Michelle Heizer; and fifteen great grandchildren. She was preceded in death by her first husband, Harry Wilson (Jack) Moneymaker and her second husband, Twyman Hogue Heizer; a Brother, Lewis Bradley; a sister, Lola Bradley; a step- son, Harold Heizer; two sons-in-law, Lloyd Strickler and Wayne Brown. A funeral service will be conducted on Wednesday, April 3, 2013 at 11 a.m. in Greenville United Methodist Church by the Rev. David Chappell. Burial will follow in the Church Cemetery. Active pallbearers will be her grandsons, Randy Humphries, Mickey and Mark Strickler, Greg Varner, and Eric and Brian Harris. Honorary pallbearers will be her grandchildren and great grandchildren. The family will receive friends from 6:30 until 8:30 p.m. Tuesday, April 2, 2013 at Greenville United Methodist Church and other times at the residence. There will be no public viewing. Henry Funeral Home is handling the arrangements. Memorials may be made to the Greenville United Methodist Church building fund, P.O. Box 250, Greenville, VA 24440 or Hospice of the Shenandoah, P.O. Box 215, Fishersville, VA 22939.

FRANCES M. HEIZER GREENVILLE, VA Our loving mother, Frances Evelyn (Bradley) Moneymaker Heizer, 90, of Greenville, went to be with her Lord and Savior Sunday, March 31, 2013, at her residence. She was surrounded by her daughters and granddaughter,... View Obituary & Service Information

The family of FRANCES MONEYMAKER HEIZER created this Life Tributes page to make it easy to share your memories.

Send flowers to the HEIZER family.