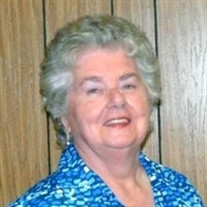 FRANCES S. REED STAUNTON, VA Frances Virginia (Shank) Clark Reed, 75, of 1779 Englewood Drive, widow of Robert Reed, Jr., flew to Heaven on September 29, 2013, to join her family. She was born August 24, 1938, in Briery Branch, a daughter of the late John Edemond and Hazel (Knott) Shank. She retired after 20 years from Maryland School for the Deaf and Blind. She had lived in Maryland for 31 years. She enjoyed senior citizens and bingo. In addition to her husband, she was preceded in death by three brothers, Cloy, Albert and Paul; two sisters, Rose Lee Ervine and Peggy Shank; her only grandchild, Brandon Lee Clark; and her former husbands, Harry Lee Clark, father of her children, and Robert Reed, Jr. whom she was married to for 30 years. She is survived by two sons and daughters-in-law, Dennis and Pam Clark and Mark and Debbie Clark; a daughter and son-in-law, Sharon and Denny Ober; a brother and sister-in-law, Wayne and Bertha Shank; and her dog, Ginny. A funeral service will be conducted at 11 a.m. Wednesday, October 2, 2013 at Grubert Avenue Church of God by Pastors Jerry Thomas and Dr. Steve Paulus. Burial will follow in Thornrose Cemetery. The family will receive friends from 6 until 8 p.m. Tuesday, October 1, 2013 at Henry Funeral Home and other times at the residence. Memorials may be made to the American Cancer Society, 420 Neff Avenue, Suite 210, Harrisonburg, VA 22801. The family would like to extend a special thanks to Augusta Health for taking care of her for the last week of her life here on Earth.

The family of FRANCES VIRGINIA REED created this Life Tributes page to make it easy to share your memories.

Send flowers to the REED family.