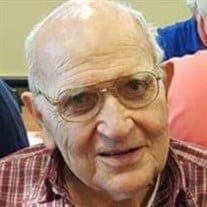 Fred Lee Smith, 91, widower of Mildred Jane (Rohr) Smith, of Staunton, died Thursday, March 18, 2021, at Augusta Nursing and Rehab, Fishersville surrounded by his family. He was born April 17, 1929, in Staunton, a son of the late Dorsey R. and Lucy (Craun) Smith. Prior to retirement, Mr. Smith was employed by Staunton Steam Laundry. He was a member of Faith Evangelical Lutheran Church. He was an avid Redskins Fan. In addition to his wife, he was preceded in death by four brothers, Marvin, Carl, Claude, and Dorsey, Jr.; and three sisters, Esther Metcalf, Bertie Deaver, and Lucille Smith. He was the last of his siblings. Family members include a son and daughter-in-law, Mike and Theresa Smith of Churchville; two daughters and sons-in-law, Cindy S. and Jay Cupp of Staunton and Gaitha S. and Wayne Matthews of Pilot Mountain, North Carolina; six grandchildren; 10 great grandchildren; and one great, great grandson. A graveside service will be conducted at 2:00 p.m. Tuesday, March 23, 2021, in Augusta Memorial Park. The family will receive friends from 4:00 until 8:00 p.m. Monday, March 22, 2021 in the Henry Funeral Home. Memorials may be made to Meals on Wheels, Valley Program for the Aging, 325 Pine Avenue, Waynesboro, VA 22980. The family would like to thank Dr. Garland Campbell, Nephrologist at U.V.A. for his care and extend a special thank you for the friendship, care, and support of the Valley View Senior Apartments Community.

The family of Fred L. Smith created this Life Tributes page to make it easy to share your memories.

Send flowers to the Smith family.