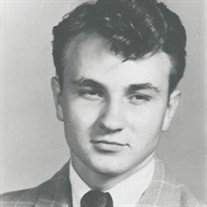 GARNETT C. EARLY KESWICK, VA Garnett C. Early, 76, passed away on Sunday, February 16, 2014. He was born on October 15, 1937 in Weyers Cave VA to the late Ray Benjamin Early and Thelma Hawkins Early. Garnett served a distinguished career in the United States Air Force spanning 30 years and much of the globe, and was a decorated veteran of both the Korean and Vietnam Wars. He spent his career in secret intelligence flying recognizant missions with SAC Strategic Air Command. After retiring from USAF, he and his family relocated back to the Shenendoah Valley, where he worked as Assistant Commandant for Fishburne Military Academy followed by a short stint with Waynesboro Public Schools. He was well known for his love of tinkering with automobiles and electronics of all sorts An active, involved member of the community, Garnett belonged to the Bahai faith and was a member of the VFW. His wife Sharon H. Early preceded him in death. He has three surviving children Melanie Early, Valerie Martin Garber and David Duvall Early and step children Crissy Kyle, Megan Shifflitt, Gary Hodge, and Kevin Hodge. Also surviving him are his grandchildren Robert Martin, Christyn Garber, Kayla Garber, Ryan Garber, Jake Duvall-Early and step grand! children Destiny and Cameron Hodge ,Clinton and Katrina Kile and Chis, Emily, Nathan and Ryan Shifflett survive him as well. He is survived by sisters Wilma Lee Stuart and husband William; Laverne Smootz Sours and her late husband Charles; Mildred Koffman and her late husband Don; Gwendolyn Spitzer and her late husband Dewey; and Carolyn Swecker and her late husband Dick. His brothers: Darryl Early and his wife Virginia and Verlin Early and his wife Lorraine all preceded him in death. He is also survived by numerous cousins, nieces and nephews. Graveside service at 2 pm on Friday, February 21, 2014 at Oak Lawn Memory Gardens in Staunton. Following the service, friends and family are invited to celebrate the life of Garnett at the home of daughter, Valerie Garber at 104 Pelham Inlet Waynesboro, VA Henry Funeral Home is handling the arrangements.

The family of GARNETT CORDELL EARLY created this Life Tributes page to make it easy to share your memories.

Send flowers to the EARLY family.