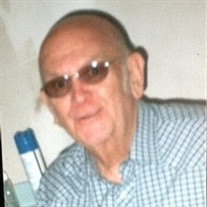 GEORGE D. SHOVER STAUNTON, VA George David Lee Shover, 66, husband of Nancey (Davis) Shover of 171 Montgomery Road, Staunton, went to be with his Lord and Savior and reunited with his grandmother and great grandson on Friday, January 27, 2012. He was born April 26, 1945 in Staunton, son of the late Robert L. and Sarah Elmira (Smith) Shover. He was raised from birth by his grandmother, Amy Bell Shover. Mr. Shover was employed from 1963 until 2000 at Augusta Co-op and was employed by Best Buy until his death. He read his bible every day and prayed for his family. He enjoyed everything John Deere and was a Redskins fan. In addition to his wife of 47 years, family members include two daughters, Miriam Kathleen Brown "CJ" of Mt. Sidney and Ferraba Denise Brown of Waynesboro; a son John David Shover, II of Staunton; and a granddaughter, Amy Bell Thomas, who was raised in their home; a brother, Carl P. Shover of Stuarts Draft; a sister, Ferraba Proffitt of Greenville; eight grandchildren; and nine great grandchildren. He will be missed by his cousin, Brenda Marshall and by his little friend, Ethan. He was preceded in death by two brothers, Glenn Thomas Shover and Lawrence Allen Shover and a great grandson, Christopher Lee Thomas. A funeral service will be conducted at 1 p.m. Tuesday, January 31, 2012 in the Henry Funeral Home Chapel by the Rev. Gregory Miller. Burial will follow in Oak Lawn Mausoleum and Memory Gardens. Active pallbearers will be Doug Hiner, Joe Graham, Ed Graham, Jeff Kincaid, Jack Eskridge, and Bill Jolloff. Honorary pallbearers will be Jonathan Shover, Jordan Shover, Jackson Shover, Jameson Shover, Samantha Godwin, Blake Fitzgerald, Travis Sheets, Nathan Henderson, Jeramy Henderson, Monica Eskridge and Alison Eskridge. The family will receive friends from 6 until 8 p.m. Monday, January 30, 2012 at the funeral home and other times at his residence.

The family of GEORGE DAVID LEE SHOVER created this Life Tributes page to make it easy to share your memories.